Producing and administrating healing or killing bugs from its satchel

Killing people the dealer has chosen.

Make as many deals as possible and kill as many people as the deals will allow (succeeded).

The Pastel Man is the main antagonist of the Creepypasta of the same name. It is a monstrous being that makes deals with people to save their dying loved ones, but in return, the person must allow it to kill somebody else who has impacted their life in someway. Its real name is unknown, since the protagonist of the Creepypasta stated that speaking its real name would summon it. So, it was nicknamed "the Pastel Man".

The Pastel Man is described as being a tall, lanky being with light blue skin and bulbous bright pink eyes. Its skin is said to be wrinkled. It has long, clawed fingers and toes, and two tiny holes on its face where its nose would be. On its neck, it wears a plain brown satchel with black stitching, which contains two kinds of insects: the yellow, smaller ones, which it uses to save people, and the red, larger ones, which it kills people with. Its teeth look like those of a shark. It usually wears a demented grin on its face, but it is replaced by a scowl when it gets angry.

When someone a person cares about is on the brink of death, the Pastel Man may appear to them and offer them a deal, in which the Pastel Man will take a yellow insect out of its satchel and shove it down the dying person's throat, which somehow causes them to make a full recovery. In return, the person who agreed to the deal must select someone else who has impacted their life in someway (but not necessarily someone they know personally) to be killed by the Pastel Man. In addition, the person must lure the victim of their choice into a secluded area and say the Pastel Man's real name to summon it. When the Pastel Man arrives, it will torture the selected person until they are near death, which the person who agreed to the deal is required to watch, and then finish them off by shoving one of the larger red bugs from its satchel into their throat, which they will choke to death on. These bugs apparently disappear from the person's body somehow after their death. The Pastel Man must be summoned before sunrise on the day after the deal is made, or it will consider the terms of the agreement to be violated and will kill the person who agreed to it instead. The Pastel Man can't save anyone who has already died, only those who are about to.

The Pastel Man first appears in the Creepypasta when the father of the protagonist, a boy named Sean, is having a stroke, offering to save him if he were to make a deal with it. After a period of shock at seeing the creature and it explaining the details of the deal, he agrees. He chooses Walter Flannigan, a boy at his school, to be killed by the Pastel Man, explaining to it how he's been bullying him since his freshman year. The Pastel Man asks him what fun being a king is without serfs to torment, causing Sean to get angry at it and tell it to go kill Walter before he changes his mind. In response to this, the Pastel Man grabs his face with its hand and yells at him that he can't tell it what to do. It goes on to tell him that he must get Walter alone and then summon it by speaking its name (which Sean, who is narrating the story, refuses to reveal to the readers because the Pastel Man told him that saying its name is the best way to summon it) by sunrise, or the terms of the agreement will be violated, and that he must watch when he dies. Sean shakes its hand, making the deal binding. The Pastel Man then takes out a small yellow insect from its satchel and shoves it down Sean's father's throat, telling him afterwards that he will make a full recovery, and that it is now his turn to fulfill his end of the bargain. When he asks it what happens if he changes his mind, it explains to him that since his father's health has already been restored, someone else must die in his place, and that if he fails to fulfill his end of the bargain, that someone will be him. It then walks out into the backyard of Sean's house, and when he follows it, it is nowhere to be seen anymore.

Sean drives to the house of Walter's best friend Eddie, and chases the former, who is drunk driving, into a secluded wooded area in the foothills outside of town. There, Walter tries to assault Sean, and when he charges to him, Sean shouts the Pastel Man's real name in a burst of emotion, causing Walter to pause in confusion for a moment, but he then continues coming towards Sean. The Pastel Man doesn't appear, and Walter shoves Sean against the hood of his car and is about to punch him, but stops when he sees the Pastel Man walk out of the shadows. After being petrified for a while, Walter tries to run back into his truck, but the Pastel Man pounces on him and digs its claws into his abdomen and begins torturing him. Sean tries to look away, but the Pastel Man reminds him that he must watch as per the conditions of the agreement, which he forces himself to do. After the massacre is over, the Pastel Man takes out another insect, a larger red one, out of its satchel and shoves it down Walter's throat, and he ends up choking to death on it. Afterwards, the Pastel Man examines its handiwork for a while, and then retreats back into the shadows.

Years later, Sean is now grown up, having graduated high school and college and having a wife named Diana and a son of his own named Matthew, but he still feels guilty about the role he played in Walter's death, which the Pastel Man doesn't let him forget about, visiting him and offering him the same deal every time someone close to him is on the verge of death, but the memory of Walter's gruesome death gives him the willpower to refuse its offer every time, even on the evening when his father passed away years later. But one day, Sean gets a call from the police at midnight informing him that his wife and son have gotten into a car accident while returning from visiting their in-laws by taxi, killing Diana and the cab driver and putting Matthew into the hospital in critical condition. He then notices that the Pastel Man is in his office, and he asks it if it can save his wife and son, to which it tells him that while his wife is beyond saving since she is already dead, his son's life can still be salvaged if he were to agree to another deal. Sean can't think of anyone in his life who should be sacrificed to the Pastel Man, but it suggests the drunk driver who crashed into the cab, who is still alive and being held in the same hospital as Matthew. Sean is surprised at this since he remembers the Pastel Man telling him before that it has to be someone he knows, but it corrects him that it merely has to be someone who's had an impact of some kind on his life. After this, Sean agrees to its deal once again and goes to the hospital where Matthew is being held. After a brief talk with the doctors who are taking care of Matthew, he goes into his room, where the Pastel Man is already waiting for him, looking over his son's body. Sean opens his son's mouth, and the Pastel Man shoves the same kind of insect down his throat that it did Sean's father's years ago, and tells Sean that it's now his turn. He goes into the room of the drunk driver, and finds out that he is a boy the same age Walter was when he and the Pastel Man killed him. He tries to summon the Pastel Man, but he can't because he can't bring himself to be responsible for the death of a second person.

Since Sean broke his end of the bargain, he was most likely killed by the Pastel Man. However, since he is the one telling the story, it is possible that he may have managed to survive somehow, which also raises the possibility that he may have managed to kill the Pastel Man somehow, or someone else, possibly Matthew, might have offered themselves as a sacrifice in his place. 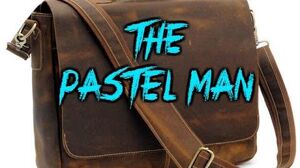