She is the Ice Elemental from before the Mushroom War. She is obsessed with awakening the elemental powers within Princess Bubblegum, Slime Princess and Flame Princess and taking over Ooo.

She was voiced by Lauren Lapkus.

Patience St. Pim was the current reincarnation of the ice elemental, and had visions of the coming of the Lich. Patience sailed into the ocean and covered herself in an ice sphere.

Patience was discovered by Finn and Jake in Ice King's castle. When she was released she was overjoyed at her increased elemental powers. Patience then froze Finn and Jake and made Ice King fetch her the other elementals so Ice King kidnaps Princess Bubblegum, Slime Princess, and Flame Princess and brings them to her. Patience shows them their potential as elementals, and attempts to make them unite, but the Princesses make her lose her balance and she crashes into her boat. The Princesses escape whilst Slime Princess shoots slime at Patience, sticking her to the wall. Patience makes Ice King scrape all the slime off her and she tells him that she will make people know of her presence in Ooo.

Patience sends a drawing of a circle to remember a past candy element (Chatsberry). It is revealed Patience mastermind the invasion which attacked the Candy Kingdom and caused Princess Bubblegum to unlock her true elemental power to defend the kingdom. Patience is seen operating and whistling ominously as she stares at a map containing information on all the princess. She kisses the tip of a paper plane and launches it into a picture of Bubblegum.

Patience plays a crucial part in the elements mini-series. In a flashback Patience captures Betty Grof and uses her powers which she stole from Magic Man as an power source for the elementals. However, instead of embracing the their powers they become overwhelmed by their powers. Causing all of Ooo to be split into four separate areas representing the four elements.

When Finn, Jake, and Ice Kinh go to the Ice Kingdom to confront her Patience appears as her pure elemental self and feels great sorrow for her actions. Later, when Princess Bubblegum starts to turn all of Ooo into candy Patience decides to freeze herself in another ice time capsule, not wanting see the consequence and hoping things will be better in the future. It is unknown what happened to her after Lumpy Space Princess fixed Ooo. She either had been fixed or is still in her time capsule.

Patience was mentioned by Marceline in her story about how Ooo was changed in the "Elements" miniseries. Patience was described as "The Blue Tranch" and she turned everyone in Ooo into potatoes. 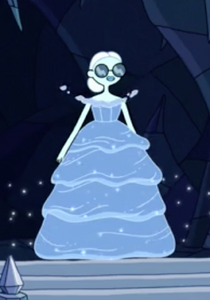 Patience in her pure elemental form. 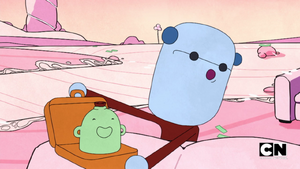 Patience depicted as "The Blue Tranch".
Add a photo to this gallery

Retrieved from "https://villains.fandom.com/wiki/Patience_St_Pim?oldid=3551420"
Community content is available under CC-BY-SA unless otherwise noted.