Teacher in Defence against the Dark Arts
Member of "R"

Find the Cursed Vaults and deliver their treasures to "R"

Torture
Murder
Assault
Impersonation
Use of the Unforgivable Curses
Treason

Patricia Rakepick was a student at Hogwarts, where she was placed into the House of Gryffindor. She often worked together with the Marauders (James Potter, Remus Lupin, Sirius Black and Peter Pettigrew).

When she became teacher for Defence against the Dark Arts, she was more then willing to help Jacob's sibling finding the Cursed Vaults to save his/her brother, guiding him/her with different clues. One time she attempts to teach Jacob's sibling the illegal Cruciatus Curse (the Torture Curse), who refused to learn it, rasing suspicion around her.

Inside the Vault, Jacob's sibling and his/her friends are betrayed by Rakepick. They find out that Rakepick had only been using them to gain access to the Portrait Vault. Rakepick is really a member of "R", a mysterious group who is after the Cursed Vaults, in order to gain it's treasures. During this, Jacob became her apprentice, though why is still unknown.

She, Jacob and Peter Pettigrew was supposed to enter the Portrait Vault, but Peter was scared of the Hungarian Horntail Dragon that guarded the Vault and ran away, leaving Rakepick and Jacob to die. During the battle, Jacob got trapped inside a portrait and Rakepick tried to get the treasure inside the Vault, but failed. She figured out that Jacob's sibling had the same potential to perform Legilimency as his/her brother, which was required in order to enter the Vault.

When Merula tried to attack her, Rakepick cast the Cruciatus Curse on her. Jacob's sibling managed to stop her by using a Garrotting Gas potion that he/she got from Professor Snape, that made her choke and that allowed Jacob's sibling and his/her friends to disarm Rakepick. Before vanishing, she warned everyone that this wasn't over. She told everyone that she and "R" would find the last Cursed Vault and gain it's treasure.

In Jacob's sibling's 6th year, she attempted to murder Ben Copper in the Forbidden Forest when he attacked her in self-defense, but the spell was interrupted by Rowan Khanna, who sacrificed a life for his/her friend. Rakepick mentioned that Jacob's sibling owed a friend's life to 'R', from a previous message by 'R', and vanished from the forest.

Rakepick can seem understandable, charming, ambitious, bold and brave when it's coming to teaching students at Hogwarts. But in reality, she is an sadistic, manipulative, cruel and unremorseful Dark Witch, doing everything in her power in order to find the Cursed Vaults for her associates "R". She will even go as far to torture and kill people in order to achive her goals even if the person she must kill is a child or a teenager. 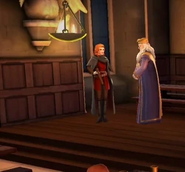