Sheltering Kevin in the Roark farm and helping him with his murders.

Aid Kevin in his killing spree.

Patrick Henry Roark, also known as Cardinal Roark, is a villain from Sin City, featuring as one of the main antagonists in A Hard Goodbye and a catalyst antagonist in That Yellow Bastard. The influential religious official Cardinal Roark is the brother of the extremely corrupt politician Senator Roark, and the uncle of the sadistic and pedophilic serial killer Roark Junior.

He was portrayed by the late Rutger Hauer, who was known for portraying Roy Batty in Blade Runner, Kurt Barlow in the 2004 Salem's Lot TV Series, Lothos in Buffy: The Vampire Slayer, and Morgan Edge in Smallville.

Roark was a doctor and a priest in World War II, then became a cardinal. When he met the mute, cannibalistic serial killer Kevin, he was convinced that Kevin's murders were divinely inspired and sheltered him in the Roark farm. Roark also joined Kevin in his killing sprees, eating some of the parts of his victims.

After Kevin is killed by Marv (who wanted revenge against Kevin for killing Goldie, a prostitute he fell in love with), Roark is confronted by Marv and explains the entire story to him, only to have Marv brutally kill him afterwards. It is not shown how Marv killed him, but it is implied that he severed Roark's jugular. 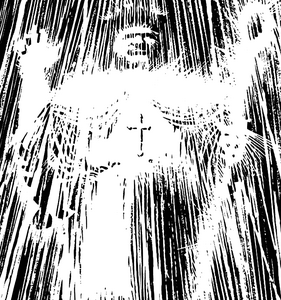 A statue of Cardinal Roark as seen in the Sin City graphic novels. 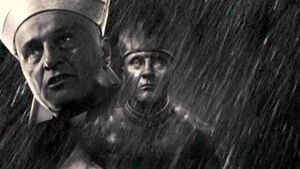 A statue of Cardinal Roark as seen in the film Sin City.