Leader of a gang of thieves

Force psychiatrist Dr. Nathan Conrad to retrieve the number of a grave containing a $10 million gemstone from a disturbed patient.

Patrick Koster is the main antagonist in the 2001 psychological thriller film Don't Say a Word. He is a criminal and the leader of a gang of thieves.

He was portrayed by Sean Bean, who also portrayed Sean Miller in Patriot Games, Alec Trevelyan in GoldenEye, Ian Howe in National Treasure, Dr. Merrick in The Island and John Ryder in the remake of The Hitcher.

Patrick is the leader of a gang of thieves who successfully steal a $10 million gemstone, but Patrick ends up being double-crossed by two members of the gang who take the gemstone for themselves. Patrick eventually finds one of them and demands that he tell him where the gemstone is, before pushing him in front of a subway train before being arrested. The dead man's distraught daughter, Elisabeth Burrows, escapes from Patrick with the gemstone hidden within her doll.

When Patrick and the rest of his gang are finally released from prison, Patrick raids an apartment opposite the home of a child psychiatrist named Dr. Nathan Conrad, then kidnaps his daughter. Patrick, watching him from the apartment, phones Nathan and tells him he must extract a six-digit number from the mentally disturbed Elisabeth, being held at the state sanatorium, or else his daughter will die. The six-digit number is that of Elisabeth's father's grave, which also contains her doll with the gemstone still inside. At first, Nathan finds it difficult to make any sense out of Elisabeth, but he eventually manages to gain her trust and finally helps her to remember the grave number. Meanwhile, Nathan's daughter, despite being locked in a room in Patrick's apartment, recognizes where she is and reveals her location to her mother by singing through an air vent. Her mother hears her voice through the vent in her own home but Patrick, seeing her reaction through CCTV his men had previously installed in their home, sends one of his henchmen to kill her. The henchman fails and ends up being killed instead.

Later on, Nathan phones Patrick, telling him Elisabeth has remembered the number he's looking for. Nathan goes with her to a graveyard on Hart Island where he meets up with Patrick in person for the first time. Elisabeth tells Patrick that the number of her father's grave is 815508, but when he unearths the coffin, he finds that it's the wrong grave. Enraged, Patrick threatens Elisabeth with his gun but Nathan realizes she must have seen the grave from upside-down, meaning the real number is 805518. This turns out to be the correct grave and Patrick finally retrieves the gemstone from Elisabeth's doll. He then decides to kill Nathan and Elisabeth but is distracted by the arrival of a policewoman Nathan had contacted earlier. Patrick wounds her but Nathan takes the opportunity to grab the gemstone and throw it towards a nearby excavation machine. He then kicks Patrick into the ditch below the machine, but Patrick begins firing at Nathan. Before he can kill him, Nathan triggers a mechanism on the machine which causes the walls of the ditch to collapse. Patrick watches in horror as earth pours through into the ditch and buries him alive. 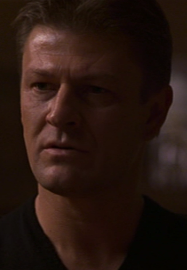 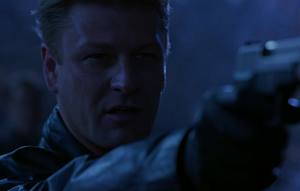 Koster being buried alive beneath a huge mound of earth.