Listening to his MP3-Player.

Causing mischief (as Rey).
Arguing over the control of body.

While in the games, he is a kind person, suffering mental trauma with the real mastermind behind his plot are Rey Sprigs (Hikaru Futaba in Japan), the second personality developed with by Pat with his trauma and also Gemini - the FM-ian alien empowering them (and actually the villain behind the game's plot), even overcoming Gemini, all on his own accounts, being corrupted by Gemini's personality.

In the original Mega Man Star Force game Patrick first appears welcoming Geo Stelar, the main protagonist, as he actually decides to go to his school again, finally recovering from his mental trauma. Pat seems a nice person, until it is shown to player that Rey causes huge mischief, such as beating people at night, some of them even being stronger and bigger than he is. As the game progresses, Geo and Pat develop friendship bonds and decide to form a BrotherBand, the highest sign of friendship. That was suppossed to be the third for Geo and the first ever for Pat himself. As it includes the Brothers to know each other's secrets, Pat tells Geo his origins secret - Patrick himself was an orphan, found on the city's junkyard where he was thrown away by his parents as a baby. As Geo leaves the junkyard which they actually visit, Ray and Gemini act together to cause the junkyard robot to malfunction and attack Geo in order to finish Megaman off and get back the Andromeda Key, needed to unleash the FMian weapon of planet destruction scales - Andromeda. However, the attempt fails.

The next day, as Geo and Pat are about to form their BrotherBand, Rey and Gemini intervene. Rey reveals the mental illness of Pat, himself to be exact, while Gemini points what he wants to obtain. They all challenge Geo and Omega-Xis (an FMian escapee who stole the Key) to a battle, while transmitting the positive and negative signals all around the city to make all the Brothers fight and argue with each other, breaking their bonds, which they actually tried before in the game. Pat, Rey and Gemini challenge Megaman as Gemini Spark Duo, with Rey leading the fight, however, they lose and Gemini gets deleted and killed in the process. Even though Pat apologises, both him and Geo are mentally scared, with Patrick being ashamed of the event, while Geo is left insecure, losing the trust in people and deleting all his BrotherBand bonds and locking himself down in his room, even with Omega-Xis leaving him because of his whining. It is stated that Pat has left the school too.

However, Gemini is later revived by FM King Cepheus and he alongside with his comrades, the other FMians steal the Andromeda Key, beating down both Omega-Xis and Harp Note, with Harp actually being another traitor. Geo and Omega-Xis reunite as Megaman and are able to fight back. Later, as Geo and Omega-Xis are about to leave the planet in order to stop King Cepheus and Andromeda from destroying the planet, Gemini tries to prevent them, beating them badly without a chance of counterattack or even a chance to change into Megaman. Pat suddenly intervents, risking his life as he tried to stop Gemini's tackle attack. After that, Pat has fallen unconcious and exhausted while the battle between Megaman and Gemini Spark, resurrected with Gemini's memory, an abiliity given by Cepheus.

In the end, as the Andromeda went out of control, Pat and other friends of Geo cheered for him and in the end, the power of their bonds connected the Earth and the lost space capsule with Geo and Omega-Xis. It is also revealed by Cepheus that Gemini was the one who inspired him to destroy AM-Planet and also the Earth itself.

In Mega Man Star Force 2 Pat and Rey appear as aftergame bosses, with Pat trying to gain control over both Rey and Gemini, which he actually pretty much succeeds. He asks Geo and Omega-Xis to help him with controlling both of them, battling Megaman as Gemini Spark. His grown control is shown as the both Geminis battle on their own account, while in the first part it was only needed to defeat Gemini Spark Black to defeat the duo. The more grown version of the boss is fought, the stronger Pat's control over Rey is, to the point where he can't even scream.

There is an "alternative timeline" introduced in Mega Man Star Force 2's aftergame. In this world, the mankind is destroyed by the EM-God Le Mu (the final boss of the game) and his offspring Apollo Flame. The survivors are just a few minor Mr. Hertzs, the inhabitants of EM-World, and also all characters who can perform EM Wave Change. However, all of them have been brainwashed or possessed by Apollo Flame to make his army of destruction, including Gemini Spark. However, while all the others have lost their personality, so Megaman doesn't hesitate to beat all Taurus Fire IF, Queen Ophiuca IF and Harp Note IF, who are the alternative versions of his closest friends, Gemini Spark retain their personality, with Gemini Spark Black IF being cocky and aggressive, while Gemini Spark White IF is more compassionate and passive even asking Megaman to leave without a fight. After Gemini Spark IF are deleted, Megaman actually shows his pain, as they have been really alike Pat and Rey from his timeline.

In the anime, Rey persona is absent and Patrick is a mentally stable character, however, taking the role of the main antagonist for himself. The place of Gemini Spark Black is taken by Gemini himself, due to the full cooperation with his host, Patrick. In a random car accident, Pat is run over by a truck and left to die in the blazes as the afraid people are trying to save themselves from the occurred explosion. However, just before Pat could die, Gemini has appeared and saved him as Pat has been the one fitting his wavelength so two of them could've performed an EM Wave Change. The anime version of Gemini Spark are easily the strongest villains of all FMian group, overwhelming Megaman in their battles. Pat himself first appears as a student, making quick friends with Geo and also being an assistant of Mitch Shepard, the future host of Libra, one of the FMians.

As the show progresses, Gemini Spark don't usually battle Megaman head-on though perfectly knowing his true identity, rather they make other FMians battle for them. That way Pat told Luna about the abandoned amusement park, currently inhabited by an FMian named Crown who wave changed with a corpse of a man, giving him immortality and a link to that park. In process, Megaman battled Crown Thunder and won with some help of Harp Note. Other than that, Gemini Spark released Wolf, who was captured into Damian Wolfe's mind once he tried to corrupt the latter. Also, they empowered Wolf Woods in battle, projecting a thunderball reminiscing a moon which enraged Wolf.

In reality, Pat and Gemini were going to steal the Andromeda Key for themselves to unleash Andromeda not only upon the Earth, but even upon the FM-Planet to rule it. As Cygnus, the commander of FMian squad on Earth and his gang retrieve the Key and Cygnus himself is controlling Andromeda, Gemini Spark attacks him to get the Key. However, with the last of his strength, Cygnus grasps Gemini making them drop the Key as Megaman unleashed a powerful Meteor Blazer, which killed weakened Cygnus and made Gemini Spark escape. Also, the dropped Key was destroyed by Megaman.

Gemini Spark took the shards of the Key and restored it, giving a fake one to Cancer, to encourage him to organize other FMians, also allowing him to take all the credit. However, in fact, Pat needed that so the FMians could restore the negative energy powering the Key - it wore off once Megaman had broken it. As the plot progresses, Gemini and Patrick silently await some results, however, ending up disappointed many times. All the times, to be exact.

As the EM Comet passes the Earth, Gemini and Pat became temporarily paralyzed. Even though Pat wasn't an EM-being, he was fully corrupted by Gemini at a time, so that would lead to this consequence. After that, Gemini Spark watch the final battle of the FMians against Megaman, their last desperate attempt to fill Andromeda Key at least a bit. However, the fake Key gets destroyed and King Cepheus himself calls off the attack of the Earth, shocking every last FMian, including Gemini and even Pat.

Deciding it is the perfect opportunity to fill the Andromeda Key, Gemini Spark start to murder their off-guard FMian comrades, staring with Taurus, who was left at the FMians headquarters. After that, they ambush and kill all Ophiuca, Libra, Wolf and Crown, only for Cancer to escape in horror as he witnessed the Crown's demise. Realizing that he would meet up with Megaman and the forces of the Satellite Police, Gemini and Pat decide to attack Harp for her being an outsider, even with a host to wave change. Harp Note battles Gemini Spark and loses as Megaman intervenes and battle Gemini Spark for one more time, this time finally defeating them and forcing to drop their EM Wave Changed form, revealing the fact that Patrick is Gemini Spark, which mentally scared Geo.

Even with an unfinished Key, Gemini awake the Andromeda and go onto a rampage, destroying cities and causing endless numbers of victims all over the world, before finally going back to Echo Ridge to face off Megaman. There, the Satellite Admins, AMians Fire Leo, Dragon Sky and Pegasus Magic sacrifice themselves to weaken Andromeda for Megaman to beat it. However, that is when Pat's true personality reveals - as Gemini himself is lost in thoughts and totally confused, Patrick gets the upperhand and stabs him in back, killing him and fully recovering the Andromeda Key. However, due to his total corrupted state, Pat himself retains his EM form. As Andromeda goes into the planet's core, Patrick tries to escape the planet, only for Megaman to catch up and grasp him. To escape the explosion, Pat throws away the Andromeda Key which Megaman was able to catch and destroy.

As Pat is left questioned of why doesn't the Earth blow up, King Cepheus himself visits the planet and fully destroys Gemini Spark White, to leave Patrick Sprigs unharmed and brainwashed of the latest events, so the last thing he remembered has been the car accident. As he fully recovers, Pat returns to his everyday normal life.

Pat is missing all through the entire season, with the exception of in the last scene where Geo and rest of the gang get together to go to Sonia's show. Pat shows up for a brief minute with Luna, Zack, and Bud sitting tight for Geo. It is apparent that Pat never again has any detestable goals, having his recollections of helping the FM-ians totally eradicated from him in the last season's finale.

Pat is appeared to be a generally nice person, while Rey is the correct inverse and pushes Pat into loathing the world. This part identity issue is exploited by Gemini, bringing about them wave changing into Gemini Spark. Pat has an interest for flowers and has Dream Park as his "place of refuge," much like Geo who has Vista Point. 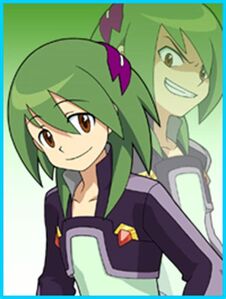 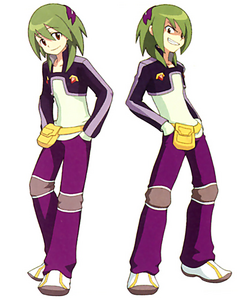 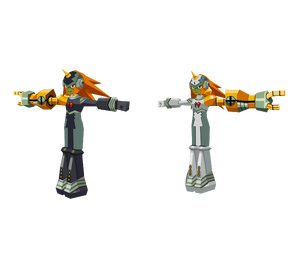 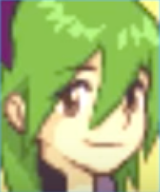 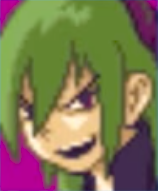 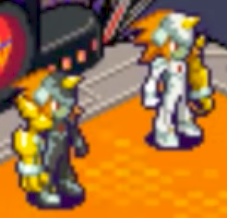 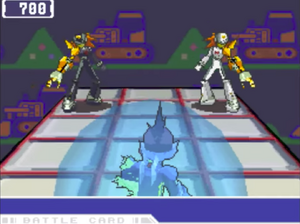 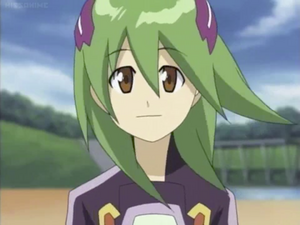 Pat in the anime. 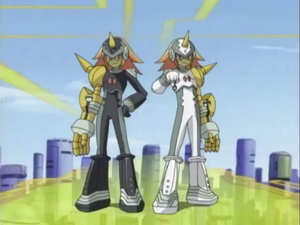 Gemini Spark in the anime. 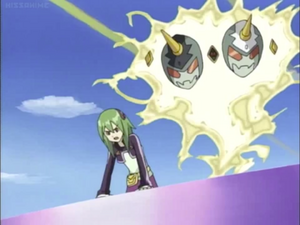 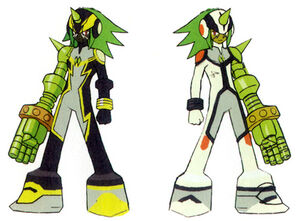 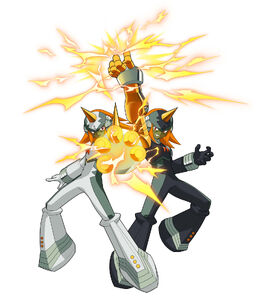 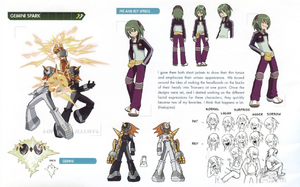 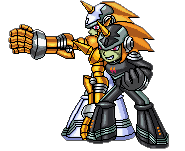 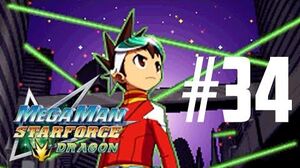 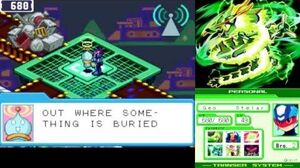