Patti O'Connor is the main antagonist of the 1983 slasher film Curtains. She is a comedian who is aspiring to be an actress. She is brought to the mansion of the esteemed film-maker Jonathan Stryker to audition for the role of a mentally unstable woman named "Audra". However, she is one of six girls auditioning for the role; the other five other being Brooke, Laurian, Tara, Christie, and Amanda.

She was portrayed by Lynne Griffin.

In the opening scene, a famed actress named Samantha Sherwood is practicing one of Audra's dialogues. Stryker tells her that it needs more work. Stryker and Sherwood trick a psychiatrist into admitting Samantha into an insane asylum so she can get more information about what a crazy woman would be experiencing. Stryker however, double-crosses Sherwood and leaves her in the hospital and begins auditioning for new actresses. Samantha escapes the asylum to get revenge on Stryker.

Patti is one of the new contestants for the role. She is first shown performing her hopefully final stand-up comedy show, during which she subliminally explains that bringing six girls to train for one role sounds like the plot of a slasher film, which foreshadows her true intentions for attending the audition.

One of the actresses, Amanda, is stabbed to death by The Hag in her apartment building. Next, each of the remaining five show up to the audition at Stryker's house and meet his assistant Matthew. Samantha also shows up at the house with the intention of wreaking havoc at the audition. Stryker notes that Amanda is missing, but brushes it off. Christie finds Patti performing a puppet show with Brooke, and the three of them watch Tara seducing Matthew outside in the Jacuzzi. Christie also eavesdrops on Samantha and Jonathan's argument and learns that a lot more is going on than meets the eye.

The next morning, Christie goes outside to practice ice-skating and discovers the porcelain doll that The Hag stole from Amanda's apartment when she killed her. Then, in an infamous scene, the Hag attacks Christie while ice-skating. Christie uses the doll to defend herself, and succeeds in knocking the killer unconscious. She runs through the woods to get back to the house, but the killer catches her and decapitates her with a sickle. The killer's true identity forges a note from Christie explaining that she couldn't handle the pressure and left, Strkyer tries to get everyone to forget about Christie, because he secretly felt guilty for having sex with her the previous night, which Christie was visibly shaken and disgusted by afterwards.

After more practicing, and Stryker observing the behaviors of the actresses to see who would best be fit for the role of Audra, The Hag sneaks into Brooke's room and puts Christie's severed head in the toilet. She frantically tries to tell everyone that Christie is dead, but when Stryker checks her toilet, the head is gone. That night, The Hag kills Laurian as she is stretching while Patti and Tara suggest that Brooke is behaving like Audra to get the role. Stryker takes advantage to seduce Brooke and get her into bed. Samantha walks in on them, and angrily arms herself with a gun before returning and emptying the magazine into them. Brooke and Stryker's bodies fall through a nearby window and land near Tara. Tara becomes terrified and tries to call the police, but the phones are down due to snow.

Tara tries to drive away, but her car is frozen. Tara finds Matthew dead, and accidentally locks herself into a props and costumes storehouse nearby. The Hag chases her through the structure, and after a long chase, pulls her through a ventilation shaft and kills her with an axe. Meanwhile, back at the mansion, Patti is opening a celebratory champagne bottle and shares it with Samantha. Samantha casually tells Patti that she shot Stryker and Brooke. Patti then enters a psychotic, euphoric state and confesses to murdering everyone else. Patti then impales Samantha with a kitchen knife. In the film's closing scene, Patti is at the insane asylum from the beginning of the film, performing her lines in front of the other patients. 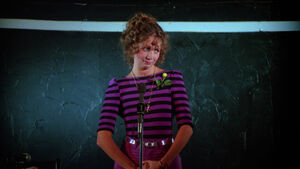 Patti at her comedy club 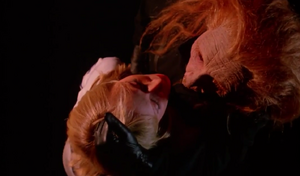 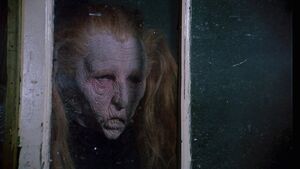 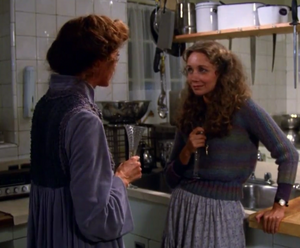 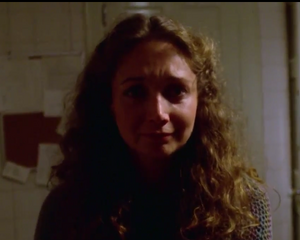 Patti reveals herself as the killer 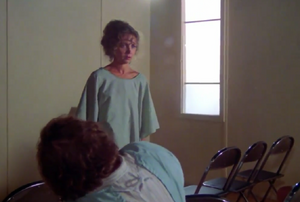 Patti in the asylum
Add a photo to this gallery

Retrieved from "https://villains.fandom.com/wiki/Patti_O%27Connor?oldid=3551429"
Community content is available under CC-BY-SA unless otherwise noted.