Minions for the Dollmaker

Kidnap Gotham's street kids to deliver them to the Dollmaker.

Patti and Doug are a villainous duo serving as the main antagonists of the second Gotham episode "Selina Kyle". They kidnap orphans from the streets of Gotham and deliver them to the Dollmaker, who sells the children's organs.

They were portrayed by Lili Taylor and Frank Whaley.

Doug and Patti arrive in Gotham. At night, they drive their bus through the city, searching for homeless children. They kidnap children for weeks but nobody in Gotham seems to notice, as the children are homeless and have not relatives. Later on, it is revealed that their employer is the Dollmaker, a scientist who is harvesting the children's organs and transplants them into wealthy clients.

One night, Doug and Patti find three street kids and introduce themselves as members of the mayor's Homeless Outreach Program. They offer the children food and the three willingly take sandwiches. While they are doing so and are distracted by Doug, Patti steps up behind them and injects them with a sedative. Two of the children fall over unconscious but by then, an old homeless man has spotted the two and runs up to them. The third of the street kids can wrestle free from Patti and runs off while Doug draws a gun and shoots the homeless man. Doug then pursues the escaping boy and attempts to grab him. However, the boy fights back and is thrown through the window of a restaurant by Doug. As they have obtained far too much attention (the restaurant was crowded) Doug and Patti are forced to escape without their third victim. The duo brings the children to a storage where they are keeping the other children captive.

The GCPD starts investigating. They start by visiting the three only places in Gotham who own the sedative found in the blood of the escaped street kid. Indeed, the owner of one place is an associate of the duo and sold them the sedative and let them use his storage to hold the children there. However, as the media has gotten wind of the story, the man gets cold feet and demands more money from Doug and Patti. The two try to reason with him, telling him that they don't have that much money on them but the man tells them that this is their problem. Patti then uses her pin on one of the man's co-workers, forcing the owner to reconsider as the poisoned guy falls to the ground. Patti is alerted when she sees GCPD detectives Gordon and Bullock arriving outside the pharmacy. While Doug is rushing to the back office with the owner, Patti moves to the counter and greets the detectives as if she was working there. When Gordon asks to speak with the owner, Patti allows him to go through to the back, where Doug is secretly holding the owner in check with a gun. When Bullock produces a warrant and Doug and Patti realise their cover is about to get blown, both draw their gun and attack the detectives. During the firefight, the two escape through the back door and drive off in their bus. Gordon and Bullock are unable to stop them, however, they are able to free the captured children from the pharmacy's storage. After the children are safe, Mayor James starts a program to send all of Gotham's street children to foster homes and correctional facilities.

Over the next day, children are rounded up and sent to upstate facilities by buses. However, the drivers of one of those buses are revealed to be Doug and Patti, who have once again used child service as a cover. Selina Kyle, who recognizes the two from the murder of the old man, is frightened and attempts to leave the bus but Patti draws her gun and forces her to sit down. She threatens that the next child standing up will be shot. The two then drive off in the bus. After this is made public, Gordon and Bullock interrogate the owner of the pharmacy where the duo got the drugs from. He tells them about a logo on the side of their truck, which leads them to the lair of the two.

Meanwhile, Doug and Patti have arrived at said lair and force the children to leave the bus. Counting each child that exits the bus, Doug mentions to Patti that he thinks that they are one kid short. Patti enters the bus to look whether one child has remained inside, but does not find one. Indeed, Selina has remained inside the bus and evaded Patti. Patti leaves the bus, thinking that the two of them mis-counted. Selina flees into the warehouse, where she scratches out the eyes of a henchman of Doug and Patti who sees her. The man stumbles back to the duo, who are alerted to Selina's escape. As the man has lost his eyes and is no use to her anymore, Patti shoots the henchman in the head. She then follows Selina into the warehouse, where she finds her attempting to flee. She aims her gun at Selina and, calling her a "naughty, little girl", prepares to shoot her. Before she can do so, she is knocked out by Gordon. Bullock arrives moments later, having taken Doug captive.

Both are arrested by the GCPD and presumably imprisoned. 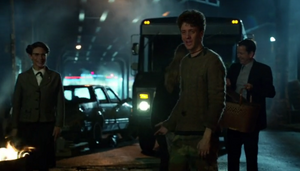 Doug and Patti arrive in Gotham 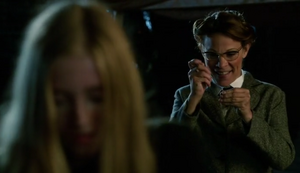 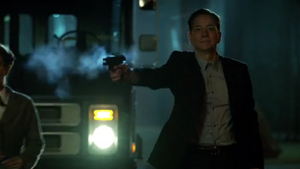 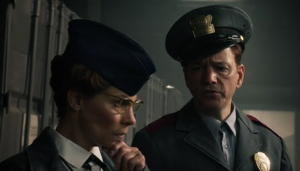 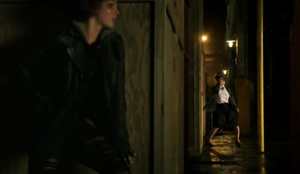 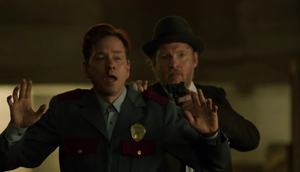 Doug is captured by Bullock