Hanging out with Violet.

Flirting with Pig-Pen.
Teasing and bullying around Charlie Brown (formerly).

Patty is a supporting character from the Peanuts comic strip by Charles M. Schulz. Her closest friend is Violet.

Out of the three mean girls in Peanuts (Violet, Lucy, and Patty), Patty was the one who was most likely to do something nice for someone, and was usually quite friendly without Violet's presence.

In the early days of the Peanuts comic strip, Patty was one of its major characters. Although she was not named until October 26, 1950, Patty appeared in the very first strip on October 2, 1950, along with Charlie Brown and Shermy. However, since she and Shermy lacked the discerning characteristics of such characters as Lucy, Linus, and Schroeder, they became less prominent as years went by.

As the only female in the strip's earliest days, Patty was often portrayed as a sort of "mother-hen" character who looks out for the younger characters; however, she would also set the tone for the strong female characters that would later appear in the Peanuts universe. In her second appearance, Patty is seen walking down the sidewalk reciting, "Little girls are made of sugar and spice and everything nice." She then punches Charlie Brown in the face and, without missing a beat, continues, "That's what little girls are made of!".

Patty was apparently the oldest child in the early days of Peanuts, as shown by one strip which revealed that she attends school but Charlie Brown does not. Eventually, she, along with Violet, became best known for their social snobbery and combined cruelty to Charlie Brown. Patty is also known for asking "Pig-Pen" why he is constantly so dirty.

Patty's name was first mentioned on October 26, 1950, 24 days after her first appearance.

Patty's birthday is November 4. She plays outfield on Charlie Brown's baseball team; though on an early occasion she was seen as catcher before Schroeder was introduced. Interestingly, it was Patty who first introduced Charlie Brown to Schroeder, claiming he lived next-door to her.

An example shows Patty and Violet reciting a very mean-spirited poem, pointing out that "Boys are rotten filled with cotton" and that "Girls are dandy filled with candy!" They then walk away smugly, where Charlie Brown retaliates with the phrase, "Generalities!!!" Still another involves the two berating Charlie Brown (in front of Linus) about a wrong answer Charlie Brown gave to a teacher's question, both going so far as to call him "stupid" and then walking off laughing at him.

In A Boy Named Charlie Brown, Violet, Patty, and Lucy gleefully taunted Charlie Brown with the derisive song "Failure Face," in a cold-hearted attempt to stop him from entering a spelling bee and to solidify in his psyche that he was nothing more than a born loser.

In the December 4, 1959 daily strip, Violet and Patty basically see Charlie Brown's mere presence, even if he doesn't do anything to them, as an affront to their supposed and self-professed superiority. Because of this, they viciously yell at him to go home. After completely demoralizing him, Violet said, "You know, it's a strange thing about Charlie Brown, you almost never see him laugh."

"We're having a party, and you're not invited!"

While Lucy's insults tend to be fairly blunt - calling Charlie Brown names like "blockhead" and making sarcastic remarks at his expense - Patty and Violet prefer to use social exclusion as their weapon, sometimes going to the extremes of making him feel like an outcast. This can be seen as a caricature of the "in crowd" that exists at many elementary and secondary schools - a lording of their own status over peers who are not members of the "in." For example, in one strip they invite him to join their "secret club," and then immediately reject him after he accepts. In an early Sunday strip, Patty and Violet put Charlie Brown and Shermy to work building a clubhouse for them, only to hang a "No Boys Allowed" sign on the clubhouse door after it is finished.

On several other occasions, especially in the early years of the strip, Patty and Violet go out of their way - sometimes with unconcealed glee - to make sure Charlie Brown knows that they are throwing a party and he is not invited. However, Charlie Brown manages to get back at them on several occasions:

In one strip, when they mention excluding Charlie Brown from their party, he lets it roll off his back saying he does not want to go to their "dumb ol' party" anyway. After he leaves, they wonder whether he meant it. Violet is convinced he did, so Patty suggests "In that case, maybe we'd better invite him."

In another similar situation, he replies to them saying if they do not like him they are better off not inviting him. Stunned to silence, the girls simply walk away, with Charlie Brown smiling after them.

In the strip from September 1, from 1954, Charlie Brown uncharacteristically threatens to strafe, then bomb their house if he is not invited, to which both girls state "Okay, you're invited."

In another strip, he tells the girls that he does not care and runs off laughing, only to become disappointed at being rejected when he is out of sight from them. 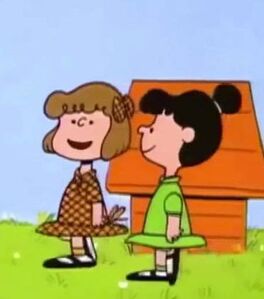 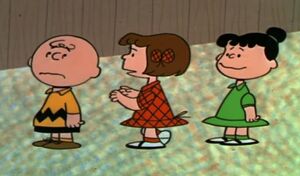 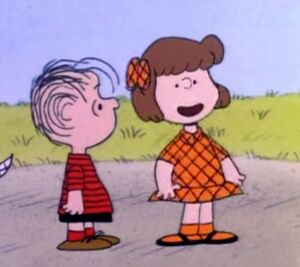 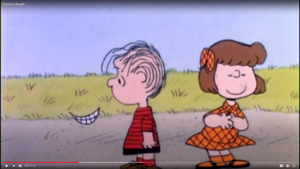 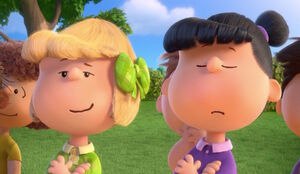