Knowledge and expertise in beauty pageants

Get together with Bob (abandoned)
To win Miss American Lady (succeeded)

'Patty Bladell 'is the main protagonist villain of the Netflix original series Insatiable. She is a bullied teenager who later becomes skinny and starts competing in beauty pageants.

She was portrayed by Debby Ryan, who also portrayed Steffani Howard in The Haunting Hour.

Patty tends to be relentless to people close to her. She was bullied for being obese but became thin after going on a liquid diet. Three months later after the homeless guy incident, she meets local civil rights lawyer and pageant coach Bob Armstrong, she competes in beauty pageants and seeks out revenge on her bullies. She is 17 years old until the episode "Banana Heart Banana", when she turns 18 years old.

She starts her homicidal rampage by attempting to kidnap Roxy Buckley (who is the main contender) to prevent her from beating her at the Regionals pageant, only for Stella Rose-Buckley to kidnap her in retaliation. After Patty escaped from Roxy and Stella, she killed Christian Keene by bashing him in his face with a crowbar while rescuing Magnolia Barnard in the process. Patty then calls Bob for help and they push Christian's car into the lake to hide the evidence she killed him, despite this murder being self-defense. Finally, she confesses to Bob that she killed Christian, while she is still unsure that she actually killed Stella Rose-Buckley.

After the events of the previous season, Patty and Bob are scrambling towards preparing to win the covetted Miss American Lady beauty pageant whilst also ensuring her criminal activity is as inconspicuous as possible, however Patty's murderous rampage from the previous season catches up with her. She then becomes obsessed with killing that she, and everyone she holds very dear get close to the truth in regards to Patty's wrathful and murderous nature. In the final episode "The Most You You Can Be", Patty's mother Angie Bladell, Nonnie, Magnolia, and Bob finally found out Patty has killed six people. She has won the pageant. In spite of these shocking revelations, Bob is framed once again for mass murder, by none other than his nemesis: Regina Sinclair (who shattered his reputation, being the infamous Pageant Killer, and kidnapping Dixie twice). As a result, Bob is arrested and after Patty visits him in jail, she promises him she'll kill Regina on his behalf.

Patty is a wrathful person who is very self-destructive, along with being just as destructive which affects everyone she holds very dear. However, she is far too honest for her own good. For example, she felt betrayed when Coralee was using Patty for her own selfish needs, which made Patty furious enough to sabotage her marriage to Bob by giving Stella Rose's necklace to Coralee as proof of their love affair, in addition to outing Bob's affair with Bob Barnard in public. The reason why that may be is because of her mother's drinking and being a sexual addict whilst ignoring her during her childhood, coupled with being bullied when she was overweight. As the show progresses, Patty's reign of terror is shown through her homicidal and psychotic behavior, also her eating habits represent hiding the truth. Finally, when it comes to her various romantic relationships; she is also irrational by rushing into them very quickly. 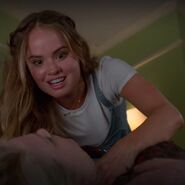 Patty bullied for being fat. 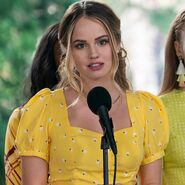 Patty at Roxy's memorial.
Add a photo to this gallery
Retrieved from "https://villains.fandom.com/wiki/Patty_Bladell?oldid=3980292"
Community content is available under CC-BY-SA unless otherwise noted.