Patricia "Patty" Donner is a one-time villain from the FOX animated sitcom The Cleveland Show, only appearing in the episode "The Essence of Cleveland". She was a former classmate of Cleveland's back in his high school years. She stalks him, having an obsessive crush on him. During her appearance, Patty has been responsible for stalking, date rape, human imprisonment, rape, and reproductive coercion.

She was voiced by Lizzy Caplan.

During Cleveland's everlasting high school years, Patricia Donner went to his Spanish class, where she first got to know him. During this time, Patricia was extremely fat, and had the nickname "Fatty Patty". She was teased by both students and teachers, although Cleveland did not really hop aboard this bandwagon, since he barely payed her any attention. There was an interaction, where some kids stole her bike and Cleveland loaned her a dime, so she could payphone home. She also mentioned listening to every episode of his pirated radio show.

Cleveland crashed an open house and discovered a secret shrine dedicated to him. He went through great lengths to find out who the owner of the house was, and in a mere 60 days, he tracked down the name of the homeowner, instead of going through the hassle of Googling the address. Cleveland bragged to Donna about having a "secret admirer", but Donna laughed in his face, reminding him of her being fat in high school.

Cleveland visited Patty at her soon-to-be-sold house, and was happily surprised to see that she had completely renovated, and now looked totally hot. She and Cleveland hit it off and had a great time catching up. Cleveland then invited her to his house, where he would videotape Donna's shocked reaction to Patty's new appearance. At dinner, Patty proved to have more knowledge on Cleveland than Donna did.

Donna grew envious of Patty and forbade Cleveland to see her again. Cleveland ignored this and went to her house, which ended up being a worse decision than he thought, as Patty had roofied his drink. Cleveland passed out and when he awoke, he was naked and tied to a bed. A note from Patty was left there, explaining how she had jacked him off and stolen his semen, which she would then use to impregnate herself with his child.

While Cleveland explained the events to Donna, she showed him a fertility clinic tattoo on her arm, saying that that is where she would go if she did what Patty did. This reminded Cleveland of Patty's hot air balloon tattoo on her arm, which led him to the Stoolbend Ballooning area. Sure enough, she was in a hot air balloon, awaiting Dr. Fist to inject her vagina with a syringe. Cleveland failed at convincing her that what she was doing was wrong, but Donna came in and convinced her not to do it because of how annoying her was. Patty realized that she was focused only on his one kind gesture of loaning her a dime, that she failed to notice all of his annoying characteristics, which majorly outweighed that one positive trait. She backed out of the sperm injection and Dr. Fist stupidly discarded the syringe into the river, where it impregnated a fish and created a fish baby with Cleveland's mustache, ending the arc on a joke cliffhanger that was meant to go nowhere. 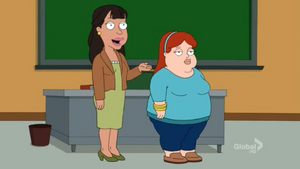 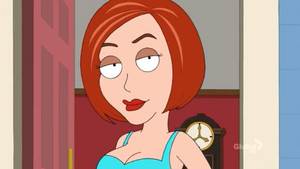 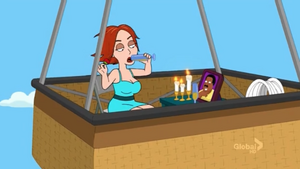