Patty Larceny is a ditzy, blonde schoolgirl who has a rather cloyingly sweet and giggly personality. Carmen Sandiego treats her as if she were her niece. Though she is a wanted thief, she is actually kind, sweet and polite person who merely suffers from kleptomania. She wears an orange shirt, a green jacket, green skirt, and saddle shoes. Her name is a play on petty larceny.

A typical teenager, Patty likes things that are fashionable and/or cute. It's stated that she's not really evil and is in fact quite sweet, but she suffers from kleptomania. She was in the PBS gameshow Where in the World is Carmen Sandiego? and the board game Where in the U.S.A. Is Carmen Sandiego?. Her name is a play on "petty larceny" which is a case of larceny where the value of the stolen goods is below a certain legally specified amount.

Patty is shedding tears in jail

Patty is party with fellow crooks after she stole the loot

Patty has a picture of Vic the Slick in her bedroom

Another view of Patty's room, and another picture of Vic.

Patty smooches at the viewer during closing credits in season 3

Patty has answer machine played with kisses on it 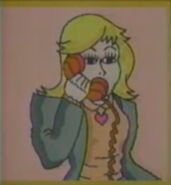 Patty reading outside the Library of Congress before she steals it

Retrieved from "https://villains.fandom.com/wiki/Patty_Larceny?oldid=3377399"
Community content is available under CC-BY-SA unless otherwise noted.