Become a most famous puppeteer in world

Mean celebrity
Patty Pupé is character from Harvey Girls Forever!. She make her debut appearance in the episode "The Puppets Take Meanhattan".

Patty is a girl who actually acts in the opposite way to who she claims to be, with the aim of blackmailing Lucretia so that she denies the rumors that she is mean and thus assure her doll a place in her puppet show. Patty also proves to be someone quite inconsiderate and conflictive, passing over people around without provocation. Like when she spat out Billy's cake with the aim of popping his balloon; when she destroyed Pinkeye's trombone with her van; almost ran over Lucretia herself and Penny on purpose; and when she walked over Bobby.

Patty Pupé also demonstrates a sadistic tendency, hitting her own puppets like Mr. Cornbread and eating a can of beans in front of her other puppet based on the same object, Baby Beans.

Patty is a white-skinned girl with carrot-toned red hair styled in a honeycomb, adorned with purple bows on the sides of her head. Patty wears a pale green one-piece dress adorned with a purple bowtie in the center of her dress and a trim of the same color located on her neck, waist, and the bottom edge of her dress. Along with having matching high heels shoes and grass green earrings.

Patty is a puppeteer influencer with a bad reputation on social media for acting mean, who came to Harvey Street as part of a tour called "Nice O' clock" because Dollcretia won an audition to be in her show. She's the true main antagonist of this episode, as she treat others in mean way and abuse her own puppets.

​​​​​When Lucretia tells the truth about Patty, the latter confronts her but she loses credibility because the children whom Patty had bothered also speak out. Therefore, after Lucretia was applauded for telling the truth, she takes advantage of removing her puppets. Billy finish her defeat putting several balloons behind her, which take her floating a very far away. 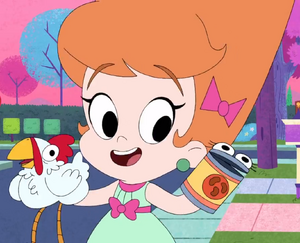 Patty Pupe with her puppets: Mr. Cornbread and Baby Beans. 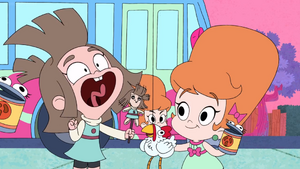 Lucretia screams in excitement as she mets Patty Pupé. 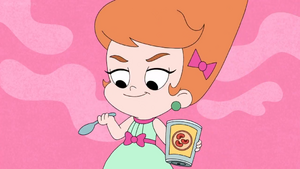 Patty Pupé's evil grin as she abuses her own puppets. 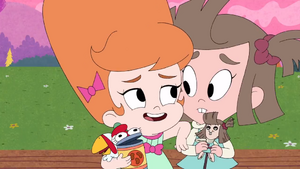 Patty Pupé blackmails Lucretia if she'll tell anyone about her true inentions, she'll lost a chance in the puppet performance. 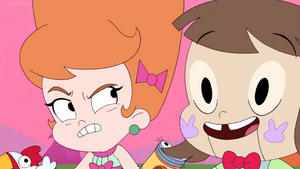 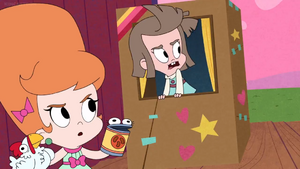 Lucretia exposes Patty Pupé's true colors, that she's mean to others and her own puppets. 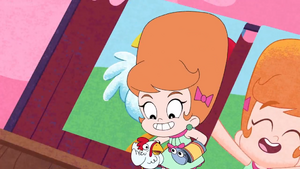 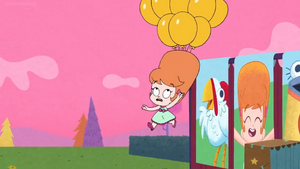