Villains Wiki
Register
Don't have an account?
Sign In
Advertisement
in: Female, Partners in Crime, Siblings,
and 51 more
English

Patty and Selma Bouvier are major antagonists in The Simpsons and minor antagonists in the 2007 theatrical film The Simpsons Movie. They are Marge Simpson's older twin sisters, Homer's sisters-in-law and Bart, Lisa, and Maggie's maternal aunts. They have a particular dislike for Homer that they have harbored since the days that he dated Marge, and they have jobs at the DMV, where they usually take great pleasure in failing every driver.

They are both voiced by Julie Kavner, who also voices their sister, Marge.

Both Patty and Selma have an antagonistic relationship with their brother-in-law and openly treat him with hostility, having hated him since the days when he first dated Marge, believing even now that he isn't good enough for their sister. Likewise, Homer holds nothing but hatred for the two, though unlike the twins, he does try to be polite to them during family gatherings for Marge's sake. However, there have been times where Selma has shown sympathy towards Homer, including revealing Homer's whereabouts to Marge that the two had kept hidden, when she saw her sister was unhappy. Patty, on the other hand, rarely had such moments, although she briefly teamed up with Homer to ruin the relationship between Selma and Homer's father, Abe. She even supported Homer's idea of group-writing a new successful teen fantasy novel for profit. They appear to have a good relationship with their nephew and nieces (to the point where Bart even rushed to save Selma from being blown up by Sideshow Bob), although some of their habits and character traits tend to disturb and slightly disguist Bart, Lisa, and Maggie.

The majority of the Bouvier twins' villainous acts in the series revolve around antagonizing Homer to some extent. In the episode "Homer vs. Patty & Selma," they loan the money to repay Homer's blown debt, but torment him with an I.O.U. note on the threat of exposing him to Marge. They force him to perform degrading tasks, such as giving them foot rubs, until they unintentionally expose him. Then, just to spite him further, they repeatedly penalize him during his attempt to get a chauffeur's license to repay the debt, making him fail the test. However, they get into trouble with their supervisor for smoking inside the DMV, though Homer saves them by taking the blame for smoking (though only because of Marge's worry for her sisters). In return for his gratitude, Patty and Selma willingly clear Homer's debt, much to his relief.

Towards the end of "Eternal Moonshine of the Simpson Mind," Patty and Selma appear to shove Homer off a high bridge when he was going to commit suicide over his guilt of perceived abuse (in reality, his memory was fragmented, and it was not abuse but him discovering the plans of a surprise party). When addressed as only having "led him to the surprise aboard the boat," the sisters showed obvious signs of having intended to murder Homer. They then attempt once more, trying to trick Homer into believing he can get a free beer by clutching an anchor to the bottom of the ocean, though it turns out that they were involved in holding up the suprise party.

The episode "Wedding for Disaster" features Homer and Marge preparing for a second wedding due to an error in Reverend Lovejoy's expired license. Determined to prevent the couple from remarrying, Patty and Selma abduct Homer and imprison him in a cell in a manner parodying the Jigsaw Killer. They intend to keep him entrapped until the wedding passes and even torment & torture Homer by providing a lollipop with the alleged key to his shackle. (The lollipop is made of hot sauce with the intent to torment Homer by forced licking-only to find that the "key" inside is just another layer of hotter sauce.) However, the two are touched by Homer's kind words for Marge and others, even them, prompting the two to return Homer to his family-albeit by bagging his head and tossing him back on the lawn. They were later blackmailed by Bart and Lisa to pay for their parents' remarriage ceremony after the two figured out (with the help from Sideshow Bob) that their aunts were behind their father's kidnapping and threatened to tell their mother. This can be considered a Moral Event Horizon since this is darker than what they normally do as they always try to convince Marge to leave Homer but not sadistically torture Homer to abandon Marge or tried to upset Marge enough to never marry Homer. 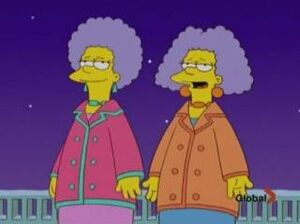 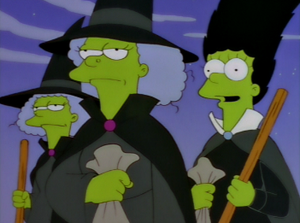 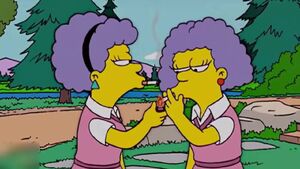 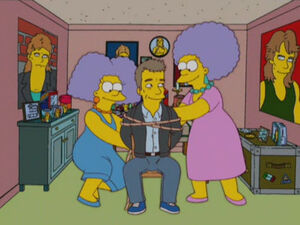