Win the election.
Impress his grandfather.
Get away with his crimes (all failed).

Paul Atishon-Wimperson, also simply known as Paul Atishon, is an antagonist in Phoenix Wright: Ace Attorney: Spirit of Justice, being the the main antagonist of the first half of "Turnabout Revolution". He is a politician who ran for a position of assemblyman of Kurain Village, riding off the success of his grandfather, Abe Atishon, who was a prominent politician in congress.

He was the plaintiff in a civil law suit against Dhurke Sahdmadhi, over the rightful ownership of the relic known as "The Founder's Orb"/"The Crystal of Ami Fey". He was also the murderer of Archie Buff, a fact that was exposed during the civil trial by Apollo Justice. Due to this, he was arrested by the authorities for his crimes.

After Apollo proves that he is the murderer of Archie Buff, Atishon enters a state of denial, refusing to believe that the trial is real and declaring that it must all be a bad dream. He imagines celebrating his election victory on live television, only for a news headline to reveal he has been arrested for murder and his victory has been rescinded. The scene returns to the courtroom, his henchmen abandon him, and he suddenly falls into a black void, screaming for his grandfather. The scene returns to reality, with Atishon standing in a comical "fall" pose and his name plate shattering before the screen fades to black, after which the sound of him collapsing is heard.

Paul embodies all of the characteristics of a "model politician", with a self-assured ego. He avoids answering questions, instead side-stepping them to push his political agendas or answering with a one word "no" or "yes", before walking away. He is incredibly self-centered and vain, and he looks down upon others, even referring to them as "peasants". He only heard what he wanted to hear - his campaigning often results in the upset of the locals. However, when they shout complaints and anger his way, he simply warps it into something complimentary and appreciative. In order to make sure his election goes his way he was willing to resort to buying votes, as well as blackmail, coercion, and murder. 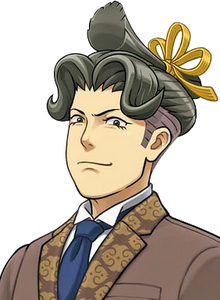