Paul Bunyan is the main antagonist of the 2013 horror movie Axe Giant: The Wrath of Paul Bunyan.

He was portrayed by Chris Hahn.

In the movie 'Axe Giant: The Wrath of Paul Bunyan,' Paul is depicted as a crazed villain rather than the good- natured folk hero he's usually seen as. He's shown as having gone insane through a combination of extreme old age (Apparently, the medical condition that caused him to become so gigantic also enabled him to live much longer than normal humans), rage over his land being intruded on by a group of juvenile offenders on an early- release program and his beloved pet ox Babe's grave being defiled by one of them (One of the offenders came upon Babe's skull and broke off one of its horns to keep as a souvenir), and longing over the loss of his true love May-Belle.

So, he goes on a homicidal rampage, stalking and killing people with his double-edged axe before eventually being killed himself by a large group of local hunters (One of them had a police- scanner, heard through it an emergency broadcast, and rallied the rest to help). Paul is riddled with bullets by the hunters and falls off a bridge to his watery grave.

Paul Bunyan is a 15ft (4.5 Meters) giant man with yellow skin, a large beard, and wrinkly skin. He wears only self made suspenders and shoes. 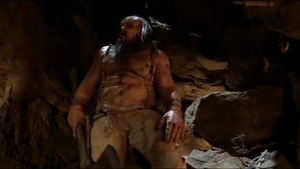 Paul Bunyan in his cave. 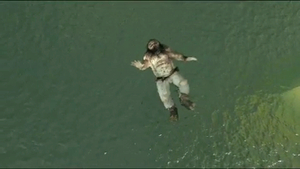 Paul falls into a river after being shot to death by a firing squad. 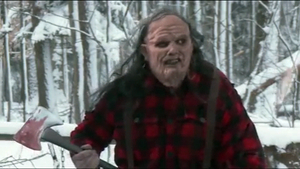 Paul Bunyan during the intro, before he was a giant. 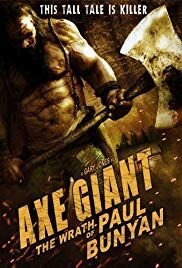 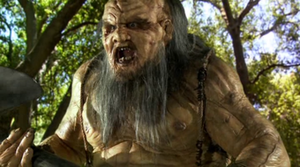 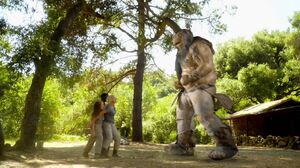 Size comparison with normal sized adults.
Add a photo to this gallery
Retrieved from "https://villains.fandom.com/wiki/Paul_Bunyan?oldid=4159862"
Community content is available under CC-BY-SA unless otherwise noted.