Kill anyone who laughs at him (failed).

Paul Carson is one of the bosses or psychopaths featured in the 2006 video game Dead Rising. It is also an optional boss in the main mode 72 Hours, who can be found on the 3rd day at 5 a.m. in Wonderland Plaza in the Casual Gals women's clothing store during the scoop Long Haired Punk. He is an emotionally unstable, paranoid teenager who threatens two women in the back room of the store to throw a Molotov cocktail at them. He is voiced by Gabriel Olds.

He was voiced by Gabriel Olds.

It is very likely that Paul was not a very well-liked student in the school due to his addressing the two women and Frank who claims they are laughing at him.

At 5:00 a.m. on September 21, Otis informs Frank that he spotted Paul in one of the women's clothing stores in Wonderland Plaza terrorizing two innocent women in the back room of the store. He told him to be careful because he saw that the boy had a Molotov cocktail in his hands.

Frank West goes to the place Otis told him to save the two women and stop the attacker. Inside the store, Debbie Willett and Mindy Baker cower in fear as Paul threatens to throw a Molotov cocktail at them. Debbie pleads him not to do this as they didn't do anything to him, to which Paul responds by accusing them of staring at him all the time and laughing at his looks and who he is.

Frank, not knowing how to approach someone so unstable and holding a Molotov cocktail in his hand, tries to approach him quietly from behind. However, Frank stumbles over the lighter fuel canister, scaring Paul, who immediately tells Frank to step back or he'll blow the whole place up. Paul assumes that Frank has come to mock him too, prompting him to attack Frank.

Paul's boss battle is very simplistic, but not easy. The key to winning lies within keeping close to him, ready to attack.

After Paul is defeated, he manages to light one last molotov to attack Frank with, but accidentally trips, catching himself on fire by mistake, as Frank watches in horror. Frank, through the player's actions, has the choice of letting Paul live or die. Letting him die, is easily achieved by doing nothing, and offers nothing in return. Letting him live, requires Frank to pick up a nearby fire extinguisher, and put out the fire before his health runs out. Saving Paul causes him to join you, giving you another survivor to save, offering the ability to gain XP through a number of ways, and also helps for achievement purposes. 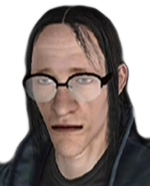 Photo of Paul in Frank's Notebook 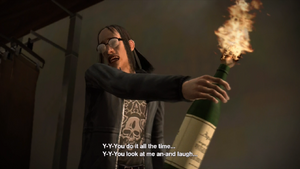 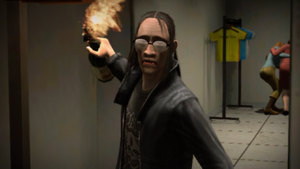 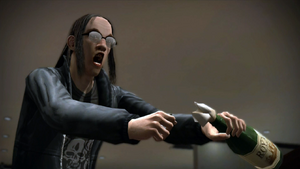 Paul trying to light up a Molotov cocktail 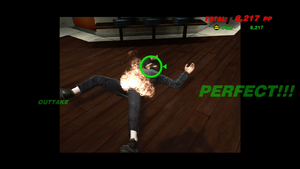 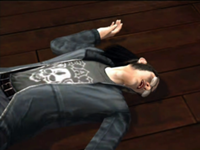 Paul's dead body
Add a photo to this gallery

Retrieved from "https://villains.fandom.com/wiki/Paul_Carson?oldid=4125354"
Community content is available under CC-BY-SA unless otherwise noted.