Evicting people from their homes.

Clear Detroit of crime no matter how immoral or rules (failed).

Commander Paul McDaggett (simply known as Paul McDaggett) is the main antagonist of the 1993 critically despised film RoboCop 3. He was the nefarious Commander of Rehab mercernaries working for Omni Consumer Corps.

He was portrayed by John Castle.

Paul McDaggett was a soldier along with his fellow Rehabs who fought in the Amazon War within South America, were brought in by the CEO of OCP. He also had some kind of a partnership with Kanemitsu himself, talking to him directly at one point.

McDaggett, without mercy, was willing to do what ever it took to help clear Cadillac Heights. McDaggett, along with his Rehab team, found a group of, what they referred to as, rebels in a church. However some of the people hiding in the church were not rebels. They were homeless people just trying to keep warm after losing their homes. McDaggett was about to get them out until RoboCop and Officer Anne Lewis tried to stop him. After being given the chance to Back Off or shoot through them McDaggett opened fire and killed Anne Lewis. RoboCop tried to shoot McDaggett, but his 4th Prime Directive would not allow him to do so. McDaggett and his men opened fire on him while McDaggett fired his XM177E2 fitted with a grenade launcher into RoboCop's chest and damaged him.

Hunting down the rebels

McDaggett managed to find the rebels' hidden headquarters with the help of a traitor named Coontz, who was visiting McDaggett at the his hotel when RoboCop showed to avenge Lewis's death. While RoboCop is distracted by Coontz McDaggett jumps out of the window and jumps in a passing Rehab truck. RoboCop gives chase in a Pimp's pink car but McDaggett gets away by throwing a large amount of money into the road causing a group of nearby children to block RoboCop's path. With the help of android called Otomo, sent by Kanemitsu, McDaggett and the Rehabs deal with the rebels and capture Dr. Marie Lazarus. Coontz is killed after the capture of the rebels as payment to the Rehabs. The members of the Detroit Police Department who were supposed to work with the Rehabs in removing people from their homes which Sgt. Warren Reed refused to be apart of and he and the rest of the cops walked out. McDaggett decides to hire some Splatter Punks to help in the removal of the people in Cadillac Heights.

McDaggett later on went to the OCP Tower to watch in the progress. He and the CEO watch as they see the Detroit Cops help the rebels and the CEO decides not to get the cops killed and decides to pull the plug, but McDaggett refuses and points the gun at the CEO telling him to sit down. RoboCop comes to the aid of the rebels and goes to deal with McDaggett. McDaggett and Robocop are about to face off till McDaggett brings in 2 Otomo androids to deal with Robocop. Nikko Halloran and Marie Lazarus arrive in time and Nikko reprograms the Otomo androids to behead one another. McDaggett was not too happy and scared since he told them that both andoinds have a fail-safe device in them with a atom bomb in it. After that RoboCop got into his flightpack and burned McDaggett's leg with the exhaust from the device, crippling McDaggett. RoboCop then exited the tower, saving Lazarus and Nikko, while McDaggett desperately tried to stop the fail-safe device. He failed to do this in time and was killed in the explosion. 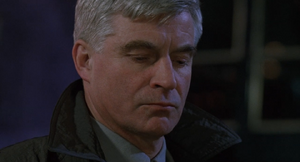 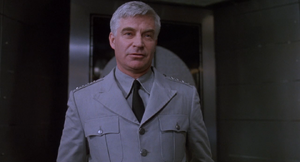 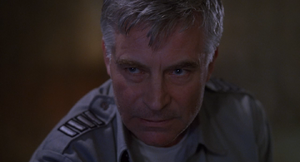 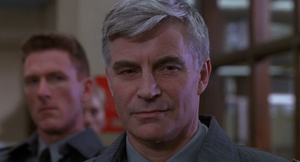 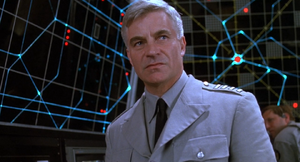 McDaggett tempting Robocop to come and find him 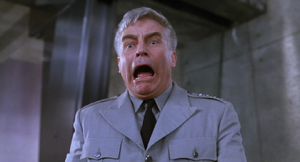 McDaggett's leg is burned by the discharge from Robocop's flightpack 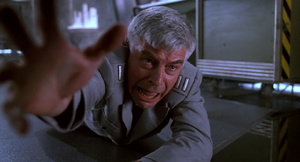 McDaggett tries to stop the self-destruct device of his androids 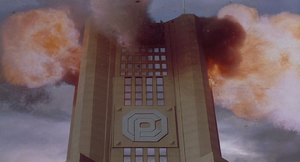 Retrieved from "https://villains.fandom.com/wiki/Paul_McDaggett?oldid=2839337"
Community content is available under CC-BY-SA unless otherwise noted.