Henchman for Negan
Commander of Saviors

Paula is an antagonist and a survivor of the outbreak in AMC's The Walking Dead. She is a member of The Saviors, and leads a small group of Saviors in a walker-filled slaughterhouse. She serves as the primary antagonist of the episode "The Same Boat".

She is portrayed by Alicia Witt, who also portrayed Dana Powell in Elementary.

Before the apocalypse, Paula lived in Washington D.C. with her husband and four daughters. She worked a thankless job as a secretary, and read inspirational e-mail stories to get her through the day.

When the outbreak began, Paula was at work with her boss. The military arrived but only allowed key personnel such as members of Congress to evacuate first. Paula's boss tried to keep her from leaving, but she ultimately kills him to be with her family. However, by the time she escapes her boss, her husband children are already dead.

Some time after the outbreak, she finds the Saviors and joins Negan and his men.

After Rick Grimes' group attacks the Saviors and takes one of them, Primo, hostage, Paula is heard through a walkie-talkie, ordering Rick and his group to lower their weapons. She refuses to show herself to Rick, but agrees to talk to him, revealing that she is holding Carol Peletier and Maggie Greene hostage. Rick offers to trade Carol and Maggie for Primo, but Paula instead takes Carol and Maggie away while calling for backup. Paula's group brings Maggie and Carol to a slaughterhouse, where they are gagged and bound in a makeshift cell.

Carol hyperventilates. Maggie is concerned, unsure whether it's real or Carol is pretending. Upon Maggie's insistence, the Saviors remove Carol's gag and look pitifully at her as she gasps for breath and prays. Carol begs them not to hurt Maggie and the baby, and asks Molly, one of the Saviors, to refrain from smoking on account of the pregnancy. Michelle, one of the other Saviors, backs Carol up. Donnie, the Savior whom Carol shot in the woods, shrieks with pain and threatens to kill her. Paula orders him to leave Carol alive as insurance until backup arrives in 30 minutes. Donnie strikes Paula. Maggie trips him as he goes for Carol, and they fight. Paula knocks Donnie unconscious with the butt of her gun and instructs Michelle to interrogate Maggie in another room. In the other room, Carol thanks Paula for helping her and Maggie with Donnie.

"You're pathetic," Paula tells Carol. Rick radios Paula to ask if she's considered his proposal to trade hostages. Paula delays her decision and ends the transmission. Carol explains to Paula that her group killed the people at the outpost because the Saviors ambushed Daryl's group on the road, instilling them with a fear of Negan. Paula tells Carol that her boss was the first person she killed after the fall. She says she stopped feeling bad about killing people when her body count reached the double digits. Carol accuses Paula of living among killers, but Paula counters that Carol's people are killers, too, making Carol a killer. After Carol tells Paula that she'll die unless she makes the trade, Paula eventually radios Rick again and tells him to meet her in a nearby field. Afterwards, she worries that the absence of static on the walkie means that Rick's group is close, possibly already outside the slaughterhouse.

Paula contacts her reinforcements, who are now only minutes away. She and Molly leave Carol alone in the cell. In their absence, Carol sharpens the crucifix on the rosary beads and uses it to cut herself free.Maggie and Carol find a hall full of impaled but living walkers, designed to slow them down or trap them. From behind, Paula fires at them until she runs out of bullets. Carol aims her gun at Paula and orders her to run, despite Maggie's insistence that Carol kill Paula. A walker attacks, causing Carol to shoot Paula in the shoulder. Maggie kills the walker, then races over to fight Michelle. During their struggle, Maggie's abdomen is nearly slashed, but Carol manages to shoot Michelle dead. Maggie and Carol find Paula injured on the ground.

Paula asks what Carol is so afraid of. "I was afraid of this," Carol says, alluding to Paula's death by her hands. Paula lunges at her. Carol shoves Paula into a speared walker, who tears off a portion of Paula's face. Paula's screams are shortly drowned out as she chokes to death on her own blood.

Later, when Maggie and Carol are making their way to the kill floor to assault the remaining Saviors, the former puts down all the walkers used in the trap, including the now-reanimated Paula. 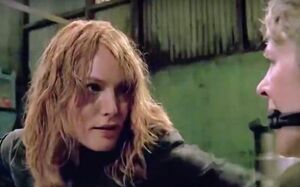 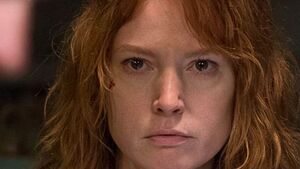 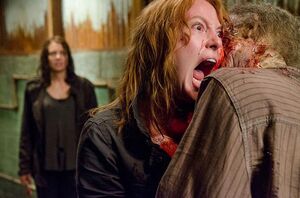 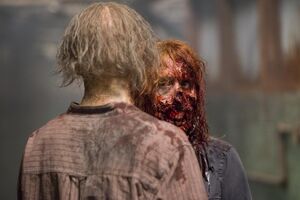 Paula as a walker.