He was portrayed by Tyler Elliot Burke.

Four years after the Battle of New York started by Loki, Paulie and his friends Lance and Leo are working on reconstructing a building. Whenever Lance, Paulie, and Leo are low on money however, they do small time crimes with each other or borrow money from loan sharks. While at a bar after work, Lance talks with Paulie about robbing Tony Gnucci's poker game while in disguise to pay their debts to them (not realizing they would notice their payment being the exact same amount that was stolen from them).

At work at the construction sight the next day, Lance talks with Paulie again about the details of their heist, they notice Frank Castle had been listening to the, behind a wall while he ate his lunch and Lance once again threatens Frank to not tell the police or The Gnuccis. While Lance is talking to him however, one of his other friends named Scut is injured when a metal beam crushes his arm. Now that Lance was down one man for the heist, Paulie suggests to Lance that they cancel it, but Lance instead suggests they have Donny be their new fourth man and he agrees after he's asked since he'd easily make a little over $10K.

Lance, Paulie, and Leo start mercilessly beating Donny for screwing up the heist and plan on killing him. Lance tells Leo to turn on the cement mixer and he eagerly agrees and hurries to do so. However, after they manage to get Donny inside a vat of cement, Frank returns to the site on his night shift with his sledgehammer and warns them to turn off the cement mixer. They laugh him off and Lance decides to take the opportunity to kill his hated coworker with his pistol, but Frank breaks Lance's knee with his sledgehammer and kills Leo after he smashes him in the head and tosses his body into the vat of cement with Donny.

Paulie runs away while shooting at Frank, who retaliates by breaking Lance's arm in order to steal his gun and shoots him in the head before he manages to drive away and then toss his body into the vat as well. 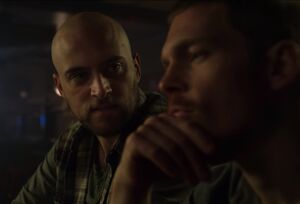 Lance talking with Paulie about robbing the Gnucci's poker game. 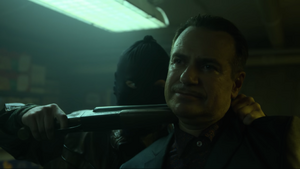