Gaining profits from his proposal of surgery.

Gain profits and the freedom to choose his own patients

Escape from his surgical failure

Pavel Frydel is one of the two main antagonists in the twenty-first elusive target mission in HITMAN (2016), alongside Akane Akenawa.

Frydel is a brilliant Polish transplant surgeon, previously the chief at the Warsaw State Central Hospital. He moved into the private sector, lured by the prospect of astronomical salaries and the freedom to choose his own patients.

Before joining the GAMA facility staff he (alongside his colleague Akane Akenawa) was involved in a transplant operation that went horribly wrong. In reality, the organ used turned out to be sourced illicitly from a tropical diseased resouvoir in Central Africa and carried a strain of EHV, killing the patient after a hemorrhagic infection.

However, Dr. Frydel fled underground after the incident, claiming his innocence, and blaming the patient's death on the providence of the organ, and even the patient himself, whom he claimed that had caught the disease in a field trip.

The assassination contract against him and Akenawa was filed with the deceased patient's parents, who offered a bonus price if 47 killed them with syringes containing hemorrhagic virus.

Just like his colleague and fellow target, Akenawa, Dr. Frydel is a coward and egotist, who refused to admit his error and constantly blamed the patient's death on a "study trip" instead of his failed surgery. He also believes he has the freedom to choose his patients and treatments, as well as desperately wanting to get money from the patient's family before any treayment can be done in first place. Frydel is also prone to misinterpriting situations and conversations. In a conversation with a GAMA bodyguard who wants to go "big," Frydel mistakes him for talking about penis enlargement instead of muscle growth, which the bodyguard was asking about. Frydel then proceeds to reminesce about how he experimented in college with his classmates, leaving a very confused bodyguard to contemplate how the conversation became so awkward. 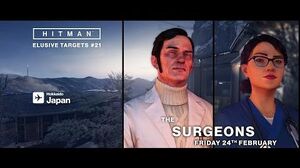 HITMAN Elusive Targets 21 The Surgeons
The in-game briefing for the Surgeons.