The Pawnee are the central antagonistic faction of the 1990 legendary Kevin Costner film Dances with Wolves, and posthumous antagonists in its sequel The Holy Road. They are a vicious tribe of Pawnee Indians who plan to exterminate the Sioux at any cost.

The chief was portrayed by Wes Studi, who also played Magua, while the other warriors were portrayed by Buffalo Child, Clayton Big Eagle, and Richard Leader Charge.

During Christine Gunther's childhood, a tribe of Pawnee Indians arrive and she and her best friend, Willie notice them as her mother orders them to stay. As their fathers order the warriors to leave, they kill both of them and Christine is forced to flee as the Pawnee massacre the rest of her family and presumably Willie. She is eventually found and adopted by a Sioux Indian named Kicking Bird and is taken to his tribe led by Ten Bears, where she is given the name "Stands With A Fist".

While a wagon provisioner namedTimmons is camping out in the plains, a group of Pawnee warriors observe the smoke in the distance and believe it's white settlers. The subordinates are concerned that they might have guns, but the leader named Sakuruta makes up his mind to go down there and kill whoever is down there. The other warriors reluctantly follow their leader and Sakuruta shoots arrows at Timmons. Timmons tries to flee, but Sakuruta continues to shoot at him. The other warriors arrive and Timmons begs them not to hurt his mules. Sakuruta scalps Timmons alive as he lets out a scream of pain and the Pawnee warriors let out a shout of victory before leaving with Timmons' mules.

After a U.S. Army lieutenant named John Dunbar befriends a local Sioux tribe, a war party is assembled to fight against the Pawnee tribe. Dunbar asks to fight, but Kicking Bird suggests that he should stay behind and watch over his family, to which he agrees. Eventually, Dunbar receives the news that the Pawnee are headed for the village, so he heads to Fort Sedgewick to retrieve his store of guns for the Sioux warriors. The Pawnee cross the valley and kill the dogs as they arrive at the camp. As they launch the attack, Dunbar and the Sioux warriors emerge from their tepees and attack with their guns. Dunbar pins one Pawnee warrior down, but the warrior headbutts him and overpowers him. The warrior tries to kill him, but Dunbar pulls out his gun and shoots him. One of the Pawnee warriors sneaks into Pretty Shield's tepee and prepares to kill them, but Stone Calf stops him with an arrow, allowing Pretty Shield to finish him off. Another Pawnee warrior tears into another tepee, but Stands With A Fist shoots him.

While Dunbar and the Sioux easily manage to defeat the Pawnee and chase them off, Sakaruta brutally kills Stone Calf from behind. As he realizes the other warriors are being driven away, Smiles A Lot and the other Sioux children shoot an arrow into his leg, causing him to scream in pain. Sakaruta tries to chase them away, but Sioux reinforcements arrive and chase him into the river. He tries to escape, but finds himself completely surrounded by Dunbar and the Sioux. Realizing he's been defeated, he lets out one last war cry as he is shot by the Sioux warriors.

After the Sioux rescue Dunbar from the Union soldiers, he and Stands With A Fist leave their tribe and the Sioux are forced to flee their winter camps before the U.S. Army could capture them. The U.S. Army search the mountains and arrive at the Sioux camp with their Pawnee scouts, but find nothing. The Pawnee scouts search for traces of the Sioux tribe as they hear a wolf howl in the distance.

The Pawnee were mentioned by Kicking Bird as he explains that enemy tribes like Pawnee and Utes do not bother them for a long time after they are defeated, while white men would still relentlessly pursue their tribe as they are being persecuted by a band of white rangers. When Smiles A Lot gets attacked by white soldiers firing cannonballs at him, he hallucinates at the sight of Pawnee horsemen and Ute warriors attacking each other in the sky. It was later mentioned that the Pawnee were responsible for killing Kicking Bird's mother as they massacred the villagers and stuck their heads in cooking pots. 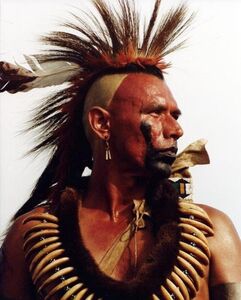 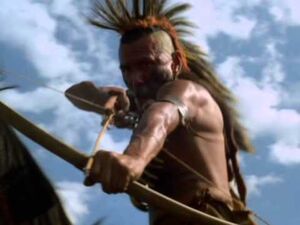 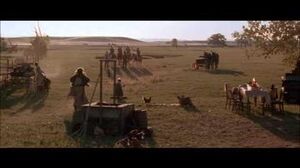 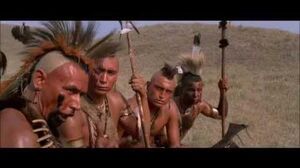 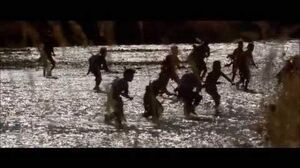 Pawnee Attack Village (Director's Cut)
The Pawnee's battle against Dunbar and the Sioux.