The Thief of Destiny

Force readers/players to worship him.

Pax, also known as the Thief of Destiny, is one of the possible villains of the 2018 interactive Netflix film Black Mirror: Bandersnatch. The villain of Jerome F. Davies' legendary choose-your-own adventure novel Bandersnatch, Pax is also being incorporated into Stefan Butler's videogame adaptation of the book; however, as time goes on, Pax's apparent role in the downfall of his original creator becomes a frequent topic of discussion, and soon begins to feature as a central figure in Stefan's apparent descent into insanity. However, whether Pax is real, metaphorical or simply a product of mental illness is dependent on the player's decisions - and ultimately their interpretation of the entire narrative.

In his appearances in the "real" world, he was portrayed by Jon-Jo Inkpen.

Described in a documentary as a "lion-creature," Pax is depicted in Jerome F. Davies' sketches as little more than a nightmarish skull-like face haloed in a mane of wild hair. This remains the basis of its depiction in modern media, with the cadaverous faces and wreaths of bestial hair appearing in designs, in the game adaptation, and even on tabs of LSD handed out by Colin Ritman. Stefan Butler's game expands on the rest of his body - presumably based on descriptions from the original novel - providing Pax with a relatively humanoid body.

However, it is not until later in the story that Stefan himself actually meets Pax in the flesh, either encountering him in the aftermath of a bad acid trip in Colin's flat, or during an attempt to unlock his father's safe. Here, Pax appears as snarling monstrosity layered in dark, leathery skin and shrouded in thick, yellowish fur; his body is hunched, primal, and often obscured by shadows or the surrounding environment, though the encounter at the safe reveals that he sports clawlike fingers. In all cases, it's made apparent that his face is once again grotesquely skeletal, sporting colorless black eyes, a lipless mouth lined with sharp yellow teeth, and an empty cavity instead of a nose.

Though the game features dialog attributed to him and though he was presumably able to speak in the book (and in Davie's hallucinations), Pax never speaks in anything other than animalistic snarls and roars.

At some point likely during the early 1960s, author Jerome F. Davies began work on what was to become his masterpiece: an interactive reading experience, the novel Bandersnatch was to allow the reader a true range of choices on how to proceed through the narrative, and leading them into encounters with government agents, enchanted daggers, and much more. However, the process of charting out such a massive branching story began to wear on Davies over time, and he soon became obsessed with the limitations of choice granted to the reader, apparently unable to properly account for all the variables of free will he could allow.

In a search for inspiration, he began taking hallucinogenic drugs, which only exacerbated his breakdown as he upped his dosage. Eventually, began to believe he was the victim of a conspiracy in which a demon known as Pax was convincing his wife to poison him with psychoactive drugs. Soon, this demon became both the villain of Bandersnatch and the emblem of everything wrong in Davies' life: called "the Thief of Destiny," Davies believed it to be responsible for his inability to control his life, and even responsible for his purported ability to perceive multiple iterations of reality at once.

In the novel, the path to a happy ending can only occur if the reader refuses to worship Pax, allowing them to eventually defeat him. Unfortunately, Davies' method of denying Pax in the real world ended with him decapitating his wife and daubing esoteric symbols on the wall in her blood, before apparently going on to finish his work. Though he was soon arrested and spent the remainder of his life in prison, Bandersnatch became an immense success; thanks to a mixture of quality writing and controversy, the book became famous, even regarded as a classic.

Possible Events Of The Film

When Stefan Butler sets out to adapt the book into a video game in 1984, an encounter Pax is the very first event featured in the demo provided to TuckerSoft president Mohan Thakur and programmer Colin Ritman. With this in mind, PAX at first appears to be little more than a character in the game, and later, as more knowledge of Davies' mental breakdown is provided, as a possible sign of mental illness haunting creators of the Bandersnatch experience. However, as the narrative begins to branch, Pax takes on a more involved role.

In the event that the viewer decides to make Stefan abandon an appointment with his therapist in favor of walking home with Colin Writman, the game designer guru decides to demonstrate the true nature of the universe to Stefan by taking him back to his flat and dosing him - first with a hit of cannabis, then with a tab of LSD (one that just so happens to be marked with a crude representation of Pax's distinctive face). Over the course of the drug trip that follows, Colin claims that it's possible to traverse multiple realities in order to redo past decisions, that the government is monitoring people by people pretending to be friends and relatives, and that Pac-Man is actually a sinister metaphor for government control - the "Pac" in Pac-Man being an anagram for Program And Control. The entire experience ends with Colin illustrating the point of multiple reality do-overs by leading Stefan onto the balcony and asking him to choose which of them will jump to their deaths: if Stefan chooses his co-worker, Colin will happily fling himself off the balcony, prompting a grief-stricken reaction from his wife, Kitty. However, when Stefan looks again, Kitty has transformed into Pax and charges at him - only for him to suddenly wake up en route to the therapist's office. Regardless of whether this was a dream or an alternate universe, regardless of the viewer's choices, Stefan will need to attend the session eventually.

After being given a prescription for a higher dose of medication (which Stefan must flush down the toilet if he wants the game to be finished on time), he returns to work, aided by a taped documentary on Jerome F. Davies. However, upon realizing the similarities to him and Davies, he soon begins to panic as the failures of implementing Bandersnatch's code begin to uncomfortably coincide with the original author's difficulty of plotting the novel. If the viewer chooses to follow this up by having Stefan read his book on game design before he goes to bed, he will get up in the middle of the night, steal his father's keys, and break into his study in an attempt to access his safe. Depending on the viewer's choices up until now, they will have multiple options on what three-letter password to enter. Here, he can enter "Pax," but it will turn out to be an incorrect password and result in Pax himself reappearing and attacking once again, causing Stefan to awaken from a nightmare the following morning. As always, whether this was just a dream or another apparent experience with parallel realities is left deliberately ambiguous.

One possible conclusion to the story involves Stefan deciding to forgo entering Pax as a password and instead enter PAC, remembering Colin's lecture on Program And Control: inside the safe, he will find evidence that he has been monitored, controlled and experimented on for his entire life by his father and his therapist - suggesting that Pax was actually a mangling of PAC all along, and that Davies might have actually become aware of a genuine conspiracy. One way or the other, this plotline ends with Stefan killing his father - first in his dream, then in the dream world, following some prompting from the viewer. After burying the body in the back garden and sending a threatening phone call to his therapist, he is arrested and jailed for the murder, and the game is released incomplete with a rating of two and a half stars out of five.

Role In The Story

Pax's true nature and role in the story is ultimately dependent on what path the viewer chooses, as well as the personal interpretations of the viewers themselves. For example, some have argued that Pax was just a symptom of Davies' mental breakdown that Stefan "inherited" after obsessive over the adaptation of the book for so long and so stressfully.

Others, having followed the P.A.C. path, believe that the Pax demon is simply a manifestation of the PAC Program's control over both Davies and Stefan: in his LSD-fueled lecture, Colin claims that Pac-Man is an illustration of modern life, the title character being secretly controlled to wander down a maze, unable to do anything but consume, doomed to begin the maze again if he somehow manages to escape and - most prominently of all - pursued by demons that probably exist only in his mind (the ghosts). As such, Pax is one of these imaginary demons, a side-effect of the programming only experienced by a few.

Some have even argued that, given that the suggested travel between alternate universes actually appears to exist in the film, it is possible that Pax is a manifestation of the space-time maze that Stefan has become trapped in, one that can only be escaped through a sacrifice of blood - or perhaps a manifestation of the meta narrative itself, one that ultimately allows Stefan to communicate with the viewer at one point. Whatever the case, given the inclusive nature of the multiple realities explored, it's even possible that every version of events depicted in the film is real, making all interpretations potentially correct. 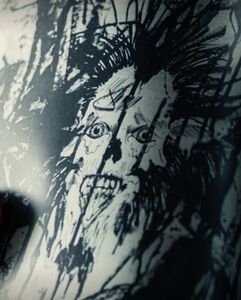 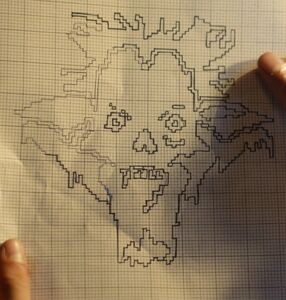 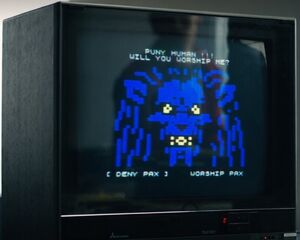 The in-game incarnation of Pax. 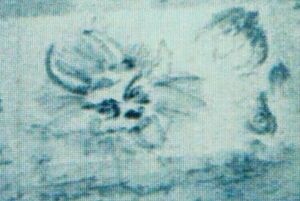 Another sketch of Pax. 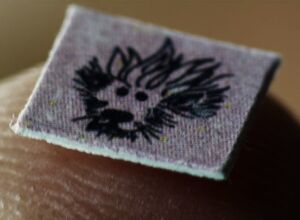 Pax's face on a tab of acid. 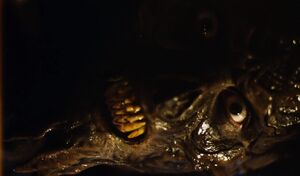