Psychic Commander of the Replica Forces

Paxton Fettel is the main antagonist of F.E.A.R.: First Encounter Assault Recon, as well as appearing in F.E.A.R. 2: Reborn​. He returns in F.E.A.R. 3, this time as a playable character working alongside his brother, the Point Man.

He was voiced by Peter Lurie, who has also voiced Sabretooth and Vulcan Raven.

Paxton displayed psychic and psionic abilities from the earliest stages of childhood. Like his brother, he inherited these abilities from his mother, Alma Wade, suggesting a genetic link as an explanation for Alma's psychic powers.

As a child, Fettel displayed the ability to destroy objects at the molecular level through telekinesis. This ability ranged from levitating a toy gun to causing grown mens' heads to violently explode. He would also telekinetically levitate, move and shake his bed during nightmares.

As an adult and after his death, Fettel's psionic abilities extended to the spiritual level, allowing his soul to return as a Ghost and suggesting a spiritual connection for their powers. After being "reborn," Fettel's abilities as a Ghost allowed him to walk through walls, possess the bodies of living humans and fire blasts of psychic energy from his hands. He gains access to his hosts' memories while possessing them. He could use his power of possession as an offensive ability, allowing him to "burn out" the bodies of his hosts by causing them to explode at the molecular level. He could only stay in a body for a limited time, as the body would eventually explode unless he could sustain it by collecting the souls of his victims.

His abilities of Telekinesis also increased as a Ghost, allowing him to suspend enemies in the air and create a "thunderclap" of energy powerful enough to kill whole groups of enemies. Like his brother, Fettel can establish psychic links with certain corpses. 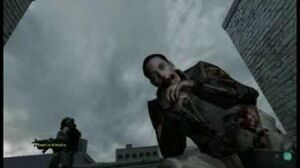 Paxton Fettel - They All Deserve To Die
Add a photo to this gallery
Retrieved from "https://villains.fandom.com/wiki/Paxton_Fettel?oldid=4154146"
Community content is available under CC-BY-SA unless otherwise noted.