Punishing those who bully or abuse teenagers.

Continue punishing those that harm teenagers in some bad way (failed)

Payback is the main antagonist in the Batman Beyond episode "Payback". He appears as a large, muscular and mentally deranged vigilante in a similar style to Lock-Up from the original Batman: Animated Series. However unlike Lock-Up, Payback's motives were to get rid of the problems of the youths who attended a help therapy group. Ultimately it was revealed Payback was the son of the man who ran the help therapy group - who had used a robotic suit to try and "fix" the problems of his father's group with violence so he would have more time to spend with himself. Payback was voiced by Bill Fagerbakke and Adam Wylie.

Kenny's father, Dr. Stanton, was a therapist who ran the Gotham Youth Counseling Center, where he spent a great amount of time helping troubled kids. However, in doing so, he ended up neglecting his own son. Tired of being dumped to the care of Howard Lewis, the center's librarian and sculptor, Kenny turned his rage on those who had been bullying or abusing teenagers. He also deduced that if he solved the problems of his father's patients for, he'd finally have more time for him. Kenny put on a 6 feet tall exoskeleton and stole Lewis's hilt to use as a laser whip. Dubbing himself Payback, he cast himself in the role of a vigilante on par with Batman, or so he liked to think.

Kenny had access to his father's Vidlinks sessions, which he used to select his victims. He targeted employers, teachers, parents, and anyone whom the patients complained about during counseling. In the middle of his attacks, Payback was interrupted by Batman, who didn't appreciate being compared to the rampant vigilante. Payback fought him and later escaped.

Payback's attacks were pretty brutal, even killing didn't seem to bother him. He nearly killed a shop manager, and plunged a moving car off a cliff. On both instances he would have murdered his victims, had Batman not intervened on time.

After listening to Terry McGinnis's rant about Bruce Wayne, Payback chose the latter as his next target. Little did he know he was walking into a trap laid down by Terry, in an attempt to draw him out. Payback attacked Bruce in the inauguration of the Vreeland Marquis Hotel. He cut the brakes of an elevator, and Bruce would have fallen from several stories, if Batman hadn't promptly stepped in. Then Payback severed a stone pillar and hurled a massive boulder at Batman. In doing so, however, the floor he was standing on caved in, and Payback plunged to the ground. Batman caught him in midair, at which point his mask fell off, revealing his true identity. Ashamed of what he had become, Kenny broke into tears and then was taken into GCPD custody. Payback is not seen in the rest of the series after this episode. 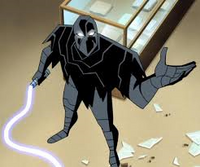 Payback (in his suit) 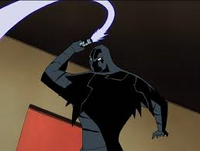 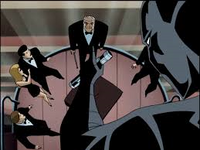 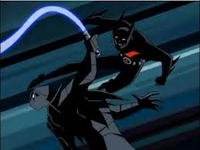 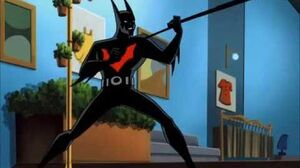 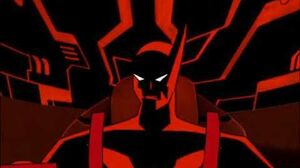 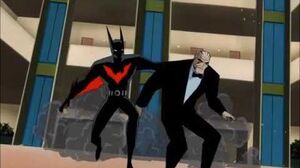 Batman Beyond vs Payback