Take charge with The Supes.

Destroy the Boys at all costs. (failed)

Payback is a supporting antagonistic faction in the adult comic-book series The Boys. They are considered the "Second most popular superteam" in the universe of The Boys and were created to be agents of Vought-American. They are an obvious parody of the Avengers.

Payback appears in Season 3 of the Amazon adaptation of the same name.

Although technically the team leader is Soldier Boy, the heavy weight of the team is Stormfront, a living Nazi from World War II-era Germany and one of the first people ever exposed to Compound V and will completely disrespect his other teammates at every opportunity to fulfill his own agendas. They were approached by a Vought-American representative who asked them to attack the Boys. The ensuing fight did not go well for Payback, with all of the members either dead or badly injured mostly by Billy Butcher himself. Every member of Payback had at one time or another tried to join the Seven, the premier super team, but been denied.

Payback is a Dynamite Entertainment team created by writer Garth Ennis and artist Darick Robertson. The team first appears in The Boys #7. The team is parody of the Marvels Avengers, with Tek Knight an analogue of Iron Man, Stormfront taking cue from Thor, the Crimson Countess inspired by the Scarlet Witch, Mind-Droid inspired by Vision, Swatto drawing inspiration from Hank Pym, and the patriotic Soldier Boy parodying Avengers leader Captain America. Playing up on the Marvel and DC competitiveness, Payback is often referenced as a second rate Seven team. 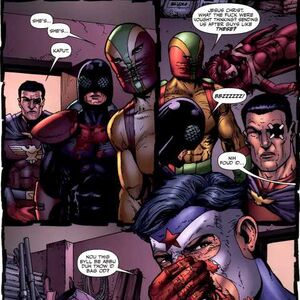 Soldier Boy with the Payback. 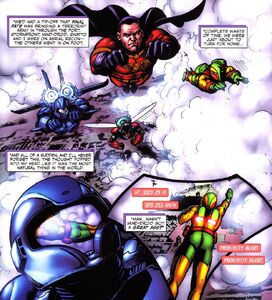 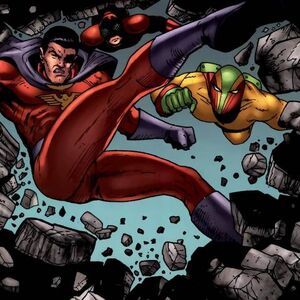 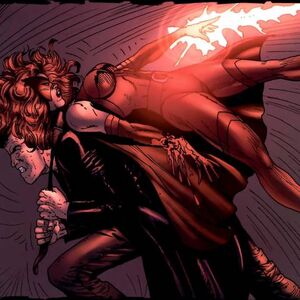