Pazuzu is a monster from Final Fantasy Mystic Quest.

The Fiend of Wind and one of the Vile Four. Benjamin finds it in Pazuzu's Tower, but Pazuzu uses an elevator to avoid battle several times. Benjamin is forced to throw a number of switches to stop the elevator from moving so he can force Pazuzu to stand and fight.

In battle, Pazuzu wields a move called "Psychshield", which reflects magic attacks back at their caster. He also wields several other air-elemental attacks. To defeat him, bombard him with Aero spells until he uses Psychshield.

Then, use normal attacks, when Pazuzu takes enough damage from weapons Psychshield will fall and spells can be used safely again. After he is defeated, the Crystal of Wind reverts to normal. Pazuzu is later reincarnated as the Zuh in Doom Castle. 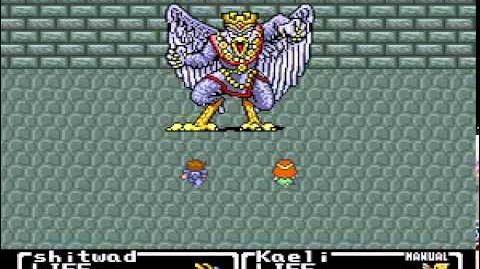