To corrupt or ruin the world she resides in and kill the people it possesses.

To have sex with as many human males as possible.

In the original book and movie, Pazuzu was the demon that possessed Regan. This was its most famous outting, but it had also appeared in all five Exorcist films and was In the 1973 film, it was voiced by late actress Mercedes McCambridge. Pazuzu is basted off of a real serial killer Paul Bateson.

In the novel and film adaption Pazuzu managed to possess Regan after she played with a Ouija board (appearing to her in form of the now infamous demon called "Captain Howdy") turned her into a hideous vessel for it to mercilessly taunt and abuse those around itself while also displaying major supernatural powers that increased as the story progressed, presumably grew in strength as the demon took more and more control over Regan's hapless form - which twisted her into a demonic parody of her former self which included behaviors like vigorous masterbation with a crucifix, demanding people to have sex with her, and yelling sexual insults at people. Regan's mother became desperate and sought two priests to exorcise the demon from her daughter after several failed attempts to solve the problem by more scientific methods (with Regan violently attacking doctors and therapists). That proved trickier than expected as even the priests were reluctant to perform an exorcism due to the belief that such things were confined to the Dark Ages.

However, Father Karras and Father Merrin eventually arrived to perform the exorcism regardless. The battle with Pazuzu was a terrifying rollercoaster for the two priests, who struggled to contain the vast powers of the creature. Sadly, the battle proved too much for Father Merrin, who died of a heart attack during the exorcism. Father Karras became enraged when Pazuzu mockingly laughs at his futile attempts to revive Father Merrin while demanding him to fuck her and was possessed by the demon after forcing it out of Regan through physical force upon which the priest leapt out of the window to his death. Presumably without a human host, Pazuzu was dispersed when Merrin died, but it returned in the future sequels of the novel and film.

Pazuzu was also instrumental in the sequel to the Exorcist titled Legion in which it took revenge for being exorcised from Regan's body in the first novel by using The Gemini Killer's soul to possess Father Damien Karras's dead body and caused chaos before being defeated once more.  This story was also adapted into a film.

Pazuzu also appeared in Scary Movie 2 and Repossessed - both of these appearances had Pazuzu's personality changed into that of a comedic villain compared to its hideously perverted true nature in the films and novels. 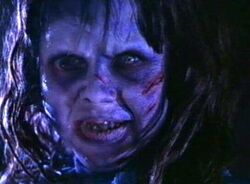 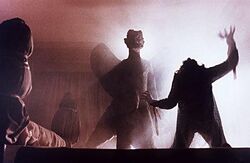 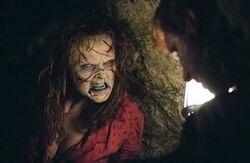 Retrieved from "https://villains.fandom.com/wiki/Pazuzu_(The_Exorcist)?oldid=2144392"
Community content is available under CC-BY-SA unless otherwise noted.