To defeat the "dark arts" (failed).

Honorable Protector
Peace Master is a minor villain the the TV show Adventure Time. He is a fighter of the dark arts who wishes to rid the Land of Ooo of Peppermint Butler so he can protect his kids.

He is voiced by Rainn Wilson.

Peace Master is shown to hate the dark arts, but also loves his family. His love then turns into protection as he fights off Peppermint Butler. He is also shown to have a sense of humility as he is embarrassed during his battle.

He first appears is "Nemesis" where he attends of meeting to warn some Candy Kingdom citizens about a dark entity in Ooo. He claims that he hates evil then leaves and drives a van with his three kids (whom he has troubles with), after getting into a crash after the youngest one barfs all over the windshield he starts blaming the dark arts and starts kicking the van repeatedly.

Peace Master appears again in "Gumbaldia" as one of the many villains joining Uncle Gumbald's legion of Candy Kingdom haters to go to war with the Candy Kingdom.

In "Come Along With Me" he witnesses the arrival of GOLB then runs away with the rest of Gumbald's army after Aunt Lolly asks them to help her fight GOLB. 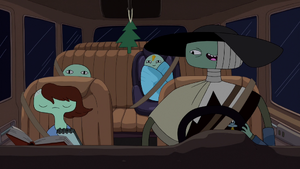 Peace Master with his family 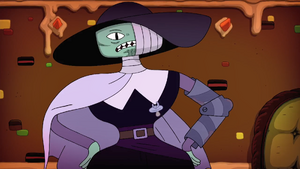