Transport contraband down to Rapture for Fontaine (formerly).

Get some research photos of Spider Splicers to defend himself against them.
Kill Jack and anyone who might be potentially working for Fontaine (failed).

Peach Wilkins, also occasionally known as Ol' Peachy, is a major antagonist in the science fiction videogame BioShock, serving as the main antagonist of the "Neptune's Bounty" level. A fisherman working for Frank Fontaine under the Fontaine Fisheries brand, Peach Wilkins soon became a prominent member of Fontaine's smuggling ring. Once Andrew Ryan sought to take down Fontaine's smuggling operation, Fontaine blackmailed his own smugglers by taxing their paychecks and threatening to turn them over to Ryan if they tried to quit, causing Wilkins' sanity to crack under pressure. Later, even after Fontaine was dead, Peach was irrationally suspicious of everyone and thought they might be secretly working for Fontaine.

He was voiced by Michael Villani.

Peach Wilkins arrived in Rapture at an unknown time, seeking to garner financial success from Ryan's free economy in Rapture. However, things did not turn out as well as Wilkins had hoped while he worked as an employee of Fontaine Fisheries. While other citizens and Ryan himself grew prosperous in Rapture, Wilkins was left unhappy with the poor working conditions in Neptune's Bounty and felt as though his hard work did not pay off as well as others. Hoping to receive something better from his work, his employer, Frank Fontaine, organized a meeting with several workers in the business at eleven. Considering Fontaine to be a "one-a us", Wilkins complied and brought several of his coworkers along to the meeting. Every worker who attended the meeting with Fontaine became part of Fontaine's smuggling operation, with the Fontaine Fisheries brand serving as its front. Although Wilkins did not feel any more free than he did prior due to Fontaine's ruthless leadership, the smuggling ring became a profitable underground business due to certain goods that were inaccessible in Rapture being brought down from the surface, which included bibles (which Ryan had banned in Rapture), crucifixes, real tobacco, beef and even cocaine (in BioShock: Rapture).

As Fontaine's businesses grew more and more over time, Ryan became suspicious of Fontaine's potential illegal activity and began to investigate his work. Evidence of Fontaine's smuggling racket kept cropping up, but little of it was concrete enough to be traced back to Fontaine himself. To make up for this, Ryan publicly outlawed smuggling, considering it punishable by hanging and sent his private security team to crack down harder on the smuggling ring. This eventually put Wilkins in a difficult situation since not only was there a chance for him to be arrested and lynched, but also due to the fact that Fontaine withdrew 80% of every smugglers' pay check and threatened to turn his workers over to Ryan if they tried to defect from Fontaine Fisheries. Wilkins became even more scared of Fontaine once a few smugglers who attempted to sell Fontaine out to Ryan's constables wound up getting killed on Fontaine's orders. At one point, a constable approached Wilkins and offered to let him go free if he turns over Fontaine. Wilkins, however, declined the offer out of fear that the constable was one of Fontaine's thugs trying to feel him out.

Even after Fontaine was supposedly killed by Ryan's men in a shootout, Wilkins remained fearful of his life and still thought Fontaine would come after him eventually. Along with potential ADAM abuse, Peach's paranoia eventually drove him insane, showing distrust towards anyone he came across. Wilkins and the rest of Fontaine's smugglers sealed themselves inside Fontaine Fisheries and effectively cut it off from the rest of Rapture. Because of this, Wilkins survived the worst of the Rapture Civil War and even eventually became an ally of sorts to the Irish revolutionary, Atlas, the one leading the opposing side against Andrew Ryan.

To reach his family and a bathysphere to escape from Rapture, Atlas needs Jack to head through Fontaine Fisheries to the Smuggler's Hideout where they have held up and radios Peach Wilkins in advance for him to let Jack through. Once Jack arrives at the entrance of the Fisheries, however, Wilkins keeps the door sealed and tells Jack he will only let him through once he fetches a research camera and takes some photographs of some Spider Splicers for him. At that moment, Rose, the first splicer Jack meets in Rapture, drops down and attacks him. Proving to be too strong for Jack, Wilkins sends out some security bots to help scare her off. Before letting Jack head off to find the camera, Wilkins sends Jack a grenade launcher via a conveyor belt to help him survive, but warns him that he will kill Jack if he "smells an ounce of Fontaine" on him. As Jack heads off, Atlas reassures Jack that Fontaine is dead and remarks that Wilkins isn't the only person in Rapture being paranoid about Fontaine, but warns him nonetheless that Wilkins cannot be trusted himself.

Once Jack finds the research camera and takes some photos of several spider splicers he crosses paths with, he heads back to the Fisheries' entrance. Wilkins opens the door, but tells him he needs some time to think and will only let Jack in if he hands over his weapons via a pneumo tube. Once again, Atlas warns Jack to keep his wits about him, since Peach is "about as straight as a dog's hind leg" and reminds Jack that he still has his plasmids to defend himself with should Wilkins decide to become hostile.

Armed with only his wrench, Jack enters the Fisheries only for fog to come in while the lights dim. From within the dark, Wilkins accuses Jack of being an agent of Fontaine sent to kill him. Wilkins then attacks Jack with molotov cocktails and sends many of his splicers to help kill Jack, while also activating a security camera and a nearby turret, prompting Jack to defend himself. After an arduous battle, Jack kills Wilkins and the rest of his men and manages to get his weapons back before heading to the Smuggler's Hideout.

Ironically, for all of his paranoia over Fontaine coming after him, Wilkins was actually correct about Jack being affiliated with Fontaine once the true identity of "Atlas" is revealed. Thus, Peach Wilkins really was taken out by an agent of his former employer. 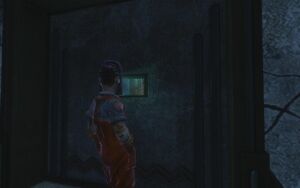 Peach Wilkins behind the sealed door.
Add a photo to this gallery

Retrieved from "https://villains.fandom.com/wiki/Peach_Wilkins?oldid=3935383"
Community content is available under CC-BY-SA unless otherwise noted.