Kill Scully and Mulder for meddling into their family affairs.

Kill any who intrude into their home turf.

The Peacock Family are antagonists from the X-Files universe. They were a group of hideously deformed inbred mutants that had become all but feral over the years and got into confrontation with the famous FBI duo when the two arrived to investigate the discovery of a heavily deformed infant that had been buried in a shallow grave.

The Peacock Family consisted largely of males and were greatly feared in their community, the local Sheriff knowing of their incestuous relationships yet turning a blind eye to them however when Agents Mulder and Scully investigate further they find out that the infant had in fact been buried alive and Scully feared the Peacock boys had a woman held hostage in their home due to the absence of other women to breed with.

However after they come into investigation the Peacock boys fly into a horrific rage (spurred on by their insane mother, who incites them to violence in order to ensure their way of life is not disturbed) and assault the local Sheriff's home at night - brutally murdering both him and his wife. Mulder and Scully ally with the local Deputy in an attempt to bring the Peacock Family to justice but as the Deputy tries to enter the home he is decapitated by a death-trap set up by the boys.

Thinking fast Agent Mulder and Scully distract the Peacock boys via releasing their pigs - in the distraction they come across the boy's amputee mother, who was the one responsible for all the misfortunes of the town as well as the mother of the murdered infant.

The boys once again fly into a rage and one of them is killed by their own death-traps in the end however the mother and Edmund manage to escape and are seen in the end-credits driving off to a new location, intent on settling down elsewhere and presumably starting the vicious cycle all over again.

In the now non-canon comic book "Home Again" a fugitive-status Mulder would stumble across a remote farm where Mrs. Peacock and Edmund had began a new family of Peacocks and once again came into conflict with the monstrous mutants - in addition the pair planned a "Peacock Family Reunion", showing that there were many more Peacocks than originally thought: these events followed those of "Home" but are no longer canon to the X-Files main time-line and can be considered "alternative media".

Due to severe deformities and mutation across several generations the Peacocks can no longer feel physical pain, thus can withstand incredible amounts of punishment - they are also immensely strong and capable of flying into a rabid rage, they are described as having regressed to a near-animal state and when engaged in violence they can often exhibit behavior and mannerisms associated with pack animals or predators, such as circling "prey" and even smelling the air to try and pick up scents (as they did when hunting for the sheriff's wife, who was hiding under her bed at the time).

Despite this at least Edmund and Mrs. Peacock showed the ability to perform greater tasks, such as building death-traps and (in Edmund's case) driving a car - Edmund was also partial to listening to "Wonderful Wonderful" whenever he was driving, a symbolism of his pride in his family and their way of life. 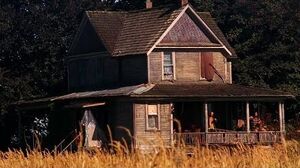 The X Files The peacocks 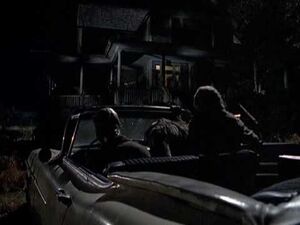 the Peacock boys heading out to what would become one of the X-Files most infamous murders. 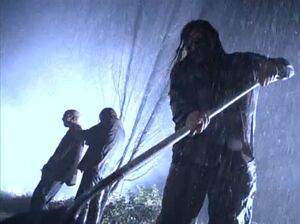 the Peacock boys bury a still living infant, one of the first on-screen victims of the Peacocks' twisted "family" lifestyle 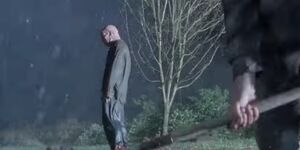 Edmund Peacock mourns the death of his child, yet does nothing to stop his brothers burying it alive. 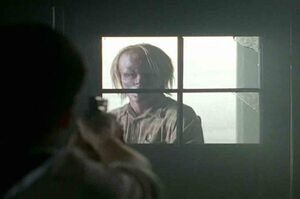 one of the Peacock boys nears their final moments in the fierce stand-off at their house.
Add a photo to this gallery

Retrieved from "https://villains.fandom.com/wiki/Peacock_Family?oldid=3861795"
Community content is available under CC-BY-SA unless otherwise noted.