Growing larger every time he eats something

Mutated Pet
Peepi, also known as Ultra-Peepi, is an antagonist of the Invader Zim episode, Hamstergeddon. He was originally the hamster for Ms. Bitters' class until he was transformed into Ultra-Peepi by Zim.

Seeing that humans found hamsters to be cute, Zim attached a device to him to make him grow every time he ate. 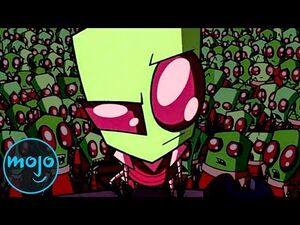