Spying on people (when told under the contract).

Spy on the Park Workers until they all die (failed).

Sadistic Stalker
Peeps is a one-shot villain from Regular Show that appears as the titular main antagonist of the episode with same name. He is a giant floating eyeball who is hired to spy on people.

He was voiced by Richard McGonagle.

He appears in the episode "Peeps". Benson sends him to spy on Mordecai and Rigby to ensure that they do their work. This gets out of hand when all of the characters, including Benson, are being watched upon by Peeps, who says that he will not leave them alone because of a contract. They decide to compete with him in a staring contest to ensure that he leaves, however, if Peeps wins, he will scoop out everyone's' eyes

Peeps cheats by unleashing many tentacles with eyes to ensure his victory. The gang fights fire with fire by using a laser pointer and aiming it at Peeps' eyes. When Peeps' final eye (his body) is hit, he falls into a river. Later when being hauled into an ambulance, he says that all he sees now is darkness, indicating he is blind.

It's completely unknown what happened to Peeps afterwards, but it's likely that he died in the hospital for their injuries. 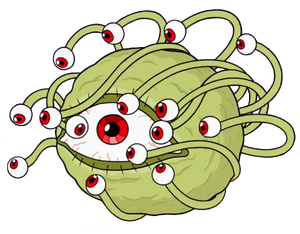 Peeps with his eye tentacles