Peewee Piranha is similar in appearance to the Dino Piranha, except it is slightly smaller and has only partially come out of its egg, its head and feet being the only parts visible. It also conceals a large, red behind inside its egg, which is its weak point.

When Mario lands on Peewee Piranha's planet, he lands on top of its unhatched egg, breaking it open and revealing Peewee's head and feet. It then begins to attack Mario by charging at him, just like Dino Piranha did in the first Super Mario Galaxy, but it also has an original attack where it will try to jump on Mario and crush him under its weight. To deal damage to it, Mario has to use two Star Spin attacks to break its egg completely, and then do another Star Spin on its now exposed behind. Alternately, he could also do a Ground Pound on the egg to shatter it in one hit. After that, it will somehow regenerate its egg and get angry, charging at Mario faster and using its jump attack twice. Mario must smash its shell again and spin into its behind one more time to defeat it and receive a Power Star. 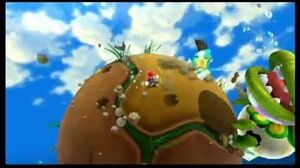 Retrieved from "https://villains.fandom.com/wiki/Peewee_Piranha?oldid=4358877"
Community content is available under CC-BY-SA unless otherwise noted.