Villains Wiki
Register
Don't have an account?
Sign In
Advertisement
in: Contradictory, Doctor Who Villains, Science Fiction Villains,
and 17 more

Can turn other people into Peg Dolls

Find more people to "play with"

The Peg Dolls are the main antagonists of the Doctor Who episode "Night Terrors".

The peg dolls turned their victims into other peg dolls. The transformation was swift. It began with the hands, which grew bigger and turned to wood, followed by the rest of the victim's body. Any clothing the person was wearing was modified into that of a doll's; extras were sometimes added, such as the hat in Amy's case. None of the person's original personality remained; the Eleventh Doctor referred to it as a state of 'living death'. It was possible to reverse the process, and the victim had full memory of the ordeal. The dolls were also capable of talking, and were heard singing a haunting rhyme leading towards the Doctor's death. They didn't seem to know that they were the ones turning others into dolls like them; they only wanted to play.

The peg dolls inhabited the doll's house in George's cupboard, which became a psychic repository for all his fears. Subsequently, the dolls were animated, and began hunting any individuals who appeared in the house to turn them into Dolls. When Rory and Amy were trapped in the house, they stumbled across the dolls and believed they were harmless.

Eventually they realised the extent of their powers when they witnessed Purcell being turned into one of them, and tried evading them as much as possible. They also hunted the Doctor and Alex when they appeared in the doll house, until they cornered Rory and them, having already converted Amy. They proceeded to attack them, momentarily stopping when George himself appeared in the same room.

The Dolls turned their attention to George and surrounded him, until Alex pushed them aside to comfort his son and assure him that he would never abandon him, which brought them to an immediate halt. When Alex's unconditional love for his son allowed George to overcome his fears, the peg dolls were expelled from the house and reverted to their original form. 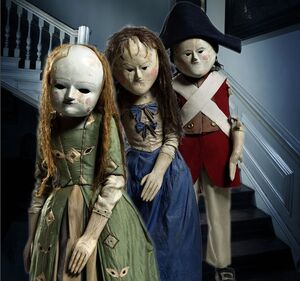 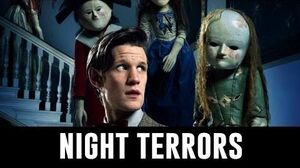