Use the Millennium Items and the KaibaCorp virtual technology to resurrect his deceased lover Cecelia (failed).

Pegasus J. Crawford (known as Maximillion J. Pegasus in the English dub) is one of the main characters in the Yu-Gi-Oh! franchise.

He is an eccentric billionaire and artist best known as the creator of Duel Monsters, the CEO of Industrial Illusions and the orchestrator of the Duellist Kingdom tournament, as well as being the former possessor of the Millennium Eye, enabling him to read minds or trap people's souls inside cards.

He was voiced by Jiro Jay Takasugi in the Japanese version of the anime, and Darren Dunstan in the English dubbed version.

Pegasus was in love with a woman named Cyndia (Cecilia in the 4Kids dub), who tragically died from illness. He searched for a way to bring her back, and found Shadi in the area where the Millennium Items were kept, discovering that with Kaiba Corp's technology and with all seven Millennium Items he could bring her back to life. Shadi gave him the Millennium Eye, saying that if he is destined for it, he will get to keep it, but if he is not, he will be condemned to eternal nightmares beyond his imagination. He was the one destined to possess the Millennium Eye, which replaced his left eye. He created the Duel Monsters card game based off the ancient Shadow Games people used to play in Egypt.

In the American Championship duel from New York City, Pegasus brought a boy to outsmart and humiliated Bandit Keith from his national title.

Pegasus then set out to collect all seven Millennium Items and take over Kaiba Corp. He was initially a good friend of Seto Kaiba, but soon attempted to take over Kaiba Corp by force, conspiring with the Big Five and kidnapping Kaiba's younger brother Mokuba when he was gone. Before he did this, he hosted a tournament called Duelist Kingdom in order to win Yugi's Millennium Puzzle. He defeated Yugi in a duel and trapped his grandfather Sugoroku's soul inside a card in order to get him to enter. The finals took place in Pegasus' castle, where Pegasus held Mokuba prisoner, and when Kaiba found him, he trapped his soul inside a card. Kaiba dueled Pegasus but lost, as his opponent could read minds with his Millennium Eye, and Pegasus imprisoned his soul inside a card. In Joey's duel against Bandit Keith, Pegasus revealed Keith stole Joey's card and cheated by hidden his "7 Completed" cards underneath his wristband and set up a trapdoor for Keith fall into the ocean.

After Yugi won the finals of Duelist Kingdom, he dueled Pegasus, and eventually gained the advantage against him by switching around between Yugi and Yami Yugi so Pegasus could not read his mind. However, Pegasus regained the advantage by taking them into Hell (or the Shadow Realm in the English version), which weakened Yugi and nearly killed him, but the power of Jonouchi, Anzu and Honda's friendship was able to overpower Pegasus' mind-reading power, and Yami Yugi defeated Pegasus. He released the souls of Sugoroku and the Kaiba brothers.

Pegasus was then attacked by Yami Bakura, who defeated him in a duel using their Millennium Items, as he was tired from his duel with Yugi, and he took Pegasus' Millennium Eye. Pegasus was last seen being taken away by his men, who told Yugi and the others that he was ill.

Pegasus was also shown to be interested by Ryuji Otogi’s Dungeon Dice game; after Yugi beat Pegasus and became the King of Games, Otogi was initially angry at Yugi, thinking he had cheated to win in his duel against Pegasus and blaming him for ruining his chances of selling his game, but then apologized after Yugi beat him, now realizing that Yugi played honestly and fairly. Otogi’s company then got an email from Industrial Illusions, which said that his game had been accepted after seeing the match on television.

Pegasus never returned until Season 4, Waking the Dragons, where he made a card for Yugi that would help him defeat Dartz (by turning the legendary dragons into knights), but he was defeated by Mai Kujaku, who was under the influence of Dartz, and his soul was taken by the Orichalcos. He was released when the Orichalcos God was defeated, and later appeared in Season 5 during one scene before Yugi's duel with Yami. It is interesting to note that the left side of his face (which once had the Millennium Eye) always remains hidden by his hair.

In the ending of Yu-Gi-Oh!, Pegasus is seen to make deals with Zigfried and his brother, Leon.

Pegasus appears as a major character of Yu-Gi-Oh! GX. He created the Gem Beasts, later giving them to Johan Andersen due to their bond for him. He created a replica of the "Winged Divine Dragon of Ra" until one of his employees, Franz, stole it until his defeat by Jaden Yuki. Pegasus invited Samejima of taking about the Light of Destruction and the reason for Edo Phoenix searching his father's ultimate card "Destiny HERO - Bloo-D". After Duel Academia was transfer to another dimension where duel monsters come to life, Pegasus founded a "Ultimate Gem God - Rainbow Dragon" stone tablet and created it to send it to the dimension for Johan to use it to bring Duel Academia back to academy island.

A poster featured in episode 98 reveals that the World Racing Grand Prix was sponsored by several corporations featured in previous Yu-Gi-Oh! series. One such sponsor was the Pegasus J. Crawford Memorial Service, implying that by this time, Pegasus had passed away.

Pegasus was an eccentric and jovial man who in many respects was actually very polite and friendly in spite of his villainous nature, he was quite cynical however due to the loss of his lover. He was quite arrogant as well and somewhat overconfident and enjoyed toying with his opponent in battle, this became problematic after he lost the millennium eye however as he had became rusty at duelling after getting overreliant on its abilities. He also had quite the temper and was greatly obsessed with both bringing Duel Monsters into the world as well as resurrecting Cecelia, the latter of which being his primary motivation for everything he did, much to the surprise of nearly everyone around him.

Despite his villainy, he is proven to be a man of his word, as when Yugi beat him in a duel, he fulfilled the promise of freeing the souls he trapped.

Pegasus also had a love for cartoons especially Funny Rabbit, shown by the vast amount of toon based cards in his deck.

In dubbed, He is generous to address those male characters who are younger than him as boy (such as Yugi as Yugi-boy, Seto as Kaiba-boy, Joey as Joey-boy, Jaden as Jaden-boy and Jesse as Jesse-boy).

Pegasus was a handsome and fairly effeminate young man with fair skin and collarbone length white hair that sometimes looks blue, lavender or grey depending on the lighting. He always had a fairly youthful appearance, even in Yu-Gi-Oh GX where he would have been in his mid 40s.

He mostly wore double breasted red suits with white piping and buttons (and trousers in the manga), a white frilled shirt, navy blue western cravat (green in the manga) and white shoes. In his first duel with Yugi in the shadow realm however he wore a red turtleneck and black double breasted suit instead. On occasion (such as in the 2004 movie) he wore a slightly darker almost plum coloured version of his original suit which had, yellow lapels alongside a black shirt and shoes instead of white and a navy blue cravat. He also wore navy blue slacks with this particular outfit.

He also had his right eye socket filled with the millennium eye until it was taken by Dark Bakura, after this his eye was always obscured by his hair, and it has never been shown what it looks like on screen but judging from character reactions to it is likely ghastly. In the manga when his eye was removed it simply left a bloody hole where it once was.

While travelling in his Egypt exhibitions he wore traditional safari style clothing, as well as a red ascot. While painting and during some of his time with Cyndia he wore brown trousers, a yellow dress shirt and purple suspenders.

Pegasus' deck is a famed of Toon monsters. His signature cards are Toon World and Copycat. He turned monsters into Toon versions of themselves such as Kaiba's Blue-Eyes White Dragon, Yugi's Black Magician Girl and Daemon's Summoning, and Cronos de Medici's Antique Gear Golem. 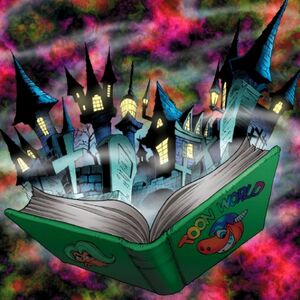 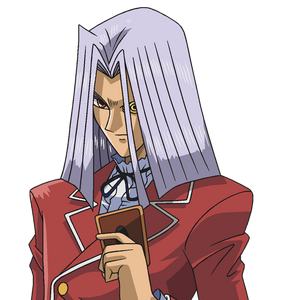 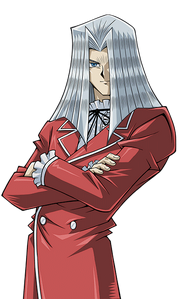 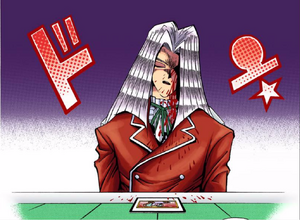 Pegasus' death in the manga. 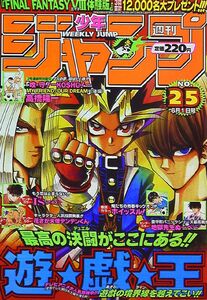