Peggy McGee (also known as The Pyramid) is the main antagonist of the Phineas and Ferb episode "Thanks But No Thanks". She is the former neighbor of the Flynn-Fletcher family who was known to be a notorious con artist.

She was voiced by Goldie Hawn.

Peggy first appeared at her window as she witnessed Candace Flynn fuming over her failures to expose her brothers' fun antics to their mother Linda (notably on their latest project with human pyramids to make sports more fun). She calls out to Candace by confessing that she saw the boys' previous adventures and inventions and that she is very astounded by them. Candace then decides to have Peggy come over to the Flynn-Fletcher house and explain everything to Linda, but Peggy is too scared to leave her house, so Candace decides to bring Linda over to Peggy's house.

However, every time Candace brings Linda over to the backyard to see Peggy, the latter is nowhere to be seen, and an annoyed Linda leaves right before Peggy returns to the scene, much to Candace's frustration. Eventually, in the end, Candace finally got Linda to see Peggy in person at the front door, only to see that she is being arrested by several police officers. Linda and Candace are confused by this until one of the officers explained that Peggy is being arrested for fraud as she was behind a "pyramid scheme" selling perspective-painted flat triangles as pyramids around Danville for profit. The officers also found a stash of her triangles inside her house as evidence of their findings.

With her crime exposed, Peggy is sent away on a police car, but not before she vows to return back to the neighborhood before Linda serves pie for her family. Realizing now that Linda will never believe of what Peggy would say to her (due to Linda's disgust over the pyramid scheme), Candace is disappointed and finally gives up in busting her brothers for the day.

It can be implied that Peggy will be given a sentence in prison on the charges of fraud. 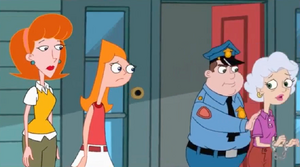 Peggy being arrested after being exposed of her "pyramid scheme". 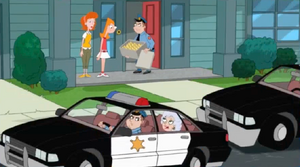 Peggy taken away on a police car as she vows to return to the neighborhood.