Killing people in order to see the red of their blood.

Return to The Other World (succeeded).

Get the Black Heart (failed).

Ivan Perke, better known as Peketo, is one of the six playable characters from the indie fighting game The Black Heart. He is the deranged ghost of a child that wants the power of the Black Heart to cover the world in blood red.

He was voiced by Andrés Borghi, the creator of the game.

Peketo's basic information (such as age or nationality) is unknown. His life was a complete living and constant hell, as his father was an abusive, alcoholic man that didn't care about him, and so was victim of constant beating. Thanks to this, he developed an strange obsession with the red color, that turned into his favorite one. His father also was a practitioner of forbidden magic, acts that amazed Peketo and made him spy on him every time his father was doing a ritual. Dying of curiosity, Peketo started to do rituals with the spirits as well every time his dad wasn't around. One day, he stole his dad's favorite book, and started reading the translated notes in Arabic that his dad had in it.

However, Peketo understood something his dad couldn't, and was teleported to the Other World. Peketo was extremely amazed by the beautiful red coloration that place had, it was the most beautiful thing he has ever seen. On top of that, an strange, powerful energy was on the place, calling for him, and Peketo wanted it more than anything, however, after a while he was teleported back to his house.

Peketo tried many times, but he couldn't return to the Other World, and he entered in a deep depression. He couldn't resist anymore, he needed to see that beautiful scarlet red once more, and there was only one way in our world to do that. When his father was doing a ritual, Peketo grabbed a ceremonial knife and decapitated him with one swing. It was satisfying, red color sprouting like a shower in front of him. His dad wasn't enough, he needed more. That's were he started a killing spree and murdered six other people before the police finally got him.

The jury could not judge him as an adult, and he was so mentally broken to be sent to jail, so they sent him to an hospital for the mentally ill. One day, Peketo was assigned a psychiatrist named David, and they both start to discuss why he did what he did. Peketo says that he sees anything wrong in his actions and everything it's fine if he is ok. Peketo tells him the whole story, and then tells David to tell him another one. David agrees, and says to him that the man in charge of assigning psychiatrists to patients if a friend of him, and that he was not his real psychiatrist. He tells him that one of the persons that Peketo murdered was his brother, and then, in an act of deranged fury starts decapitating Peketo with an scalpel.

Regretful of his actions, David starts to look with horror the severed head of Peketo between his hands, but then, something starts materializing behind him. Apparently, Peketo couldn't die because his many pacts with the spirits (and he will live fifty hundred years) and was reborn with a new form. After saying to David that it was fun, Peketo decapitates him with one quickly swung of the scalpel. With his new form, Peketo could return to the place where his journey started, the Other World, but the heart's power was nowhere to be found. He would find it, no matter what, even if that means that he will be there until the end of times.

After many dangers, Peketo finally found the source and keeper of the heart's power, an extremely powerful, primordial being called Final. He asked for the power because he wanted it for him and only him, but Final compares him with a previous contestant that wanted the heart, while she took her power from her hate and sadness, Peketo took his powers from his dark, plain evilness. Then, Final denies him the heart and they both engage into a fight, with Final wanting to eradicate his evil existence from The Chaos, however he lost against him. Final asks him what he wanted the heart, as he had no purpose with it whatsoever, and Peketo answers he wants it just because he wants it. Having enough, Final gets up and tries to vanquish him with his Lazer Fury. Peketo explodes and supposedly dies, but he materializes below him and tells him that he can't be killed. Knowing that he can't destroy him at any means, Final puts in charge his "Plan B", as he was calling another being telepathically that has almost the same condition as him. Peketo asks with interest who he is, and then, something starts materializing behind him.

A weird, grey mummy with a red skull recognizes him as Ivan, and Peketo understand that the being was in fact, his father.

His father tells him that he was an ungrateful bastard, and that killing him proofs that at least he was good at something. Furious, Peketo responds that he hates him and the he would murder him a thousand of times for the eternity if needed. Then, he proceeds to lash out to his father and they both fall into a pit in the Chaos, fighting until the end of times. The rest is an enigma.

Peketo, in life, was a normal child from like 10 or less years old. He was redhead with a well trimmed hair and always had a sick expression on his face due to constant trauma. In his ghost form, he wears a kimono-like red with black garment and his head was replaced with an egg-shaped object with three black holes replacing his mouth and eyes. His skin turned completely white and is considerably taller.

Peketo is deranged and psychotic. He takes joy on seeing red and does not see it as something evil. Peketo can't see something wrong in his actions and takes it as something normal that he does or fun, going so far that he can't see himself as evil. He has no respect for any kind of life whatsoever, and would murder anyone just to see the red coloration of his blood. However, behind his murderous personality, hides a being that still has the mentality of a child, playing around and behaving as a someone that needs to be repressed, acts that takes even in the most gruesome of murders.

As a self-demonic being, Peketo has many abilities at his display: 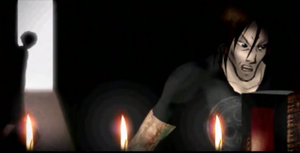 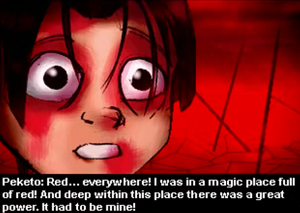 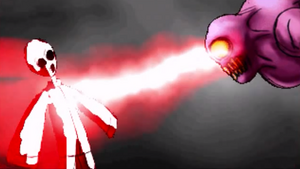 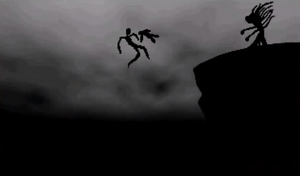 Retrieved from "https://villains.fandom.com/wiki/Peketo?oldid=3544205"
Community content is available under CC-BY-SA unless otherwise noted.