Selling necklaces to his customers.

Turning a person's anger into an explosive

Alien Criminal
Pekka Zeppelin is a woodpecker-themed Gangler Monster and is the main antagonist in episode 36 of 2018 TV series called Kaitou Sentai Lupinranger VS Keisatsu Sentai Patranger. Also he is equipped with a Wrist Computer-like treasure called L'homme sage.

He was voiced by Kouichi Ohori.

Pekka Zeppelin made his first appearance where he used the treasure's ability as he makes an invention for his latest scheme in order to impress Dogranio Yaboon so that way he can be a successor. However his hideout is then invaded by the arrival of the Patrangers. So he battles them however he used one of his ability to make Sakuya clumsy, so with that said he then retreats.

After the intro he'd appeared at Seven Star Plaza disguised as a human as he gave Sakuya what supposed to be a "necklace" that will quiet down the anger once put on. Turns out it was a device that'll absorbs the wearers anger thus transforming it into energy for a remote bomb that Pekka hid somewhere in Japan.

A while later he had appeared at the same location handing out these device to the customers however his cover was blown thanks to the thieves to reveal his disguise.

Then he was at a parking lot battling the Lupinranger and once Lupin Red gives Pekka the slip Lupin Yellow gained access to Pekka's safe (which his password is 0-1-4) and got L'homme sage (which translate as "Wise man") Wrist Computer. However before he was finished off by the thieves Patren3gou managed to stop them, so that way Pekka could tell where he planted the remote bomb at, but he refused to spill the location. However with quick thinking Patren3gou manage to trick Pekka to use his own ability against him, causing him to tell where the bomb is at Tsukiyo Tower. Once that was done he was then taken out by the thieves and thus the slip up effect has been removed from Sakuya as he manage to knock the antenna off the bomb thus averting the destruction on Japan.

However thanks to Goche Ru Medou he has been enlarged as he battles Lupin Magnum Superior along with the arrival of the Pat Kaiser that's now holding a destroyed bomb. So as Lupin Magnum gained access to Pekka's emptied safe the Pat Kaiser then puts the bomb in it once that was done they sent Pekka Zeppelin into outer space where he was finished off by Lupin Magnum. 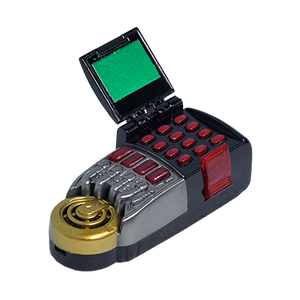