Penelope is an antagonist in the Sly Cooper series, first appearing as a minor antagonist in Sly 3: Honor Among Thieves, and then the secondary antagonist Sly 4: Thieves in Time. She’s also the archenemy of Bentley and Sly Cooper.

She is an anthropomorphic mouse from Holland and a genius mechanic who disguised herself as the Black Baron, but then became a honorary member the Cooper Gang as well as the girlfriend of Bentley. However, she then betrayed the gang and sided with Cyrille Le Paradox under the guise of the Black Knight.

In the third chapter Flights of Fancy, Penelope is introduced as an RC expert contacted by Bentley via email exchanges. She promises to aid them in the game's final heist against Dr. M if they assist her in helping her employer The Black Baron during the upcoming ACES dog-fighting tournament. Sly and the gang assist her and partake in the ACES championship while undermining recurring rogue Muggshot with the (unknowing) assistance of Carmelita Montoya Fox.

The Black Baron is revealed to have kept his championship by having his minions to cheat for him and even having assassin planes bump off competitors who are to skillfull.

However, during the final competition, Sly shoots The Black Baron's plane down, forcing him to leap atop a plane's left wing. Sly pursues and the two fight, with The Black Baron being revealed to be none other than Penelope in disguise when Sly wins. She reveals that she posed as The Black Baron in order to bypass age restriction laws in the ACES tournament.

Throughout the rest of Honor Among Thieves, Penelope becomes an ally with her RC car skills and develops an attraction to Sly despite Bentley's obvious attraction to her. However, during their time in Blood Bath Bay, she starts to reciprocate Bentley's feelings. With her skills, they manage to break past Dr. M's security on the Cooper Vault and later, she helps reconstruct it alongside Bentley.

She appears as the hidden secondary antagonist of the game. In the intro, Penelope is mentioned to have worked alongside Bentley on constructing the time machine. However, at some point, she mysteriously vanished around the same time the Thievius Raccoonus started losing its records due to tampering by Cyrille Le Paradox's desire to collect all Cooper ancestor artifacts. Her disappearance, along with the altered text, prompt Bentley to reorganize the Cooper Gang to find her.

During the fourth level Of Mice and Mechs, Sly's ancestor Sir Galleth is defeated and humiliated by a rogue called The Black Knight, an anachronistic suit of robotic armor working on behalf of Le Paradox. As the Cooper Gang foil The Black Knight's operations, Bentley discovers to his horror that it is, in fact, Penelope acting as The Black Knight. She escapes to a larger mech (the result of Operation: Overlord) and does battle with Sly, attempting to kill him with missiles and shockwaves while he retaliates with arrows that damage her robotic armor's weak spots. However, in the process, Sly becomes trapped under some rubble, seemingly giving Penelope the chance to kill him.

She is interrupted by Bentley, who counters her in a mech of his own and asks why she would betray them. Penelope argues that she did it for Bentley's sake, as working for/with Sly was only holding back his true potential. Working for Le Paradox, Penelope arranged the Black Knight plot as a means to get Le Paradox's help so as to kill Sly. Naturally, Bentley only rejects her "help" and does battle with her, scoring a victory and saving Sly from her.

Following this, Penelope is sentenced to a maximum security prison in modern-day Europe, but manages to escape, leaving behind her symbol painted on her cell wall. Bentley notes that he has been receiving mysterious postcards bearing the same image in various locales, hinting a future appearance.

In both games, Penelope shows a mechanical knack, as is evident by her Black Baron and Black Knight costumes. Her mechanical knack also extended to work with RC cars, most notable in various Sly 3 missions that required her RC car to run bombs or shoot enemies in tight areas or terrain too dangerous to tread. Sadly, she ended up using these abilities in the fourth game for evil purposes, as seen with her Black Knight armor.

She greatly cares about Bentley and shared a mutual love until her disappearance and work with Le Paradox. This caused her to develop a great hatred for Sly Cooper due to seeing him as a hindrance to her boyfriend's potential. However, she also demonstrates a desire to essentially rule the world through weapon design, which calls more of her motives into question. Ultimately, Penelope is what Bentley might have become had he agreed with Dr. M, in that Penelope feels that she (as well as Bentley) is superior to Sly, she has cast aside her morals and ethics, seeks riches and has betrayed her friends and the man who loved her. 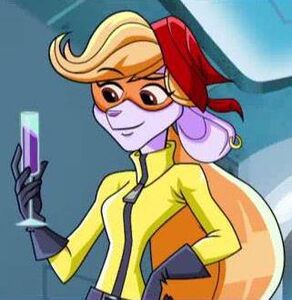 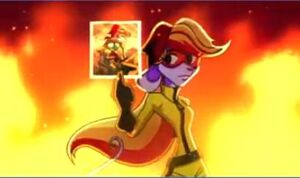 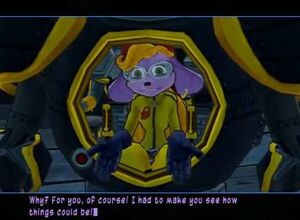 Attempting to justify her actions