Sonny with a Chance

To kill Sonny, the cast of So Random! and Chad on the plane unless he dates her (failed).

She is portrayed by Leslie-Anne Huff.

Role in the show

Marta first appears (although is referred to by her real name), in the episode "Legend of Candyface". But in that episode, she was just a supporting character. She despised Sonny because she and Chad Dylan Cooper were in love when she had a crush on Chad. Marta then planned on pretending to be Sonny's friend before ruining her reputation and then killing her.

In "Sonny With a Secret", Marta frames Sonny for stealing a necklace from a mall and stealing her friend Grady's gold coin, ruining her friendship with So Random. She also exposes Chad's secret that he makes all his decisions based on fortune cookies (later revealed because his microphone was on) to the paparazzi and frames Sonny for it, causing Chad to break up with her. Marta also makes up a character named Vicky Sikowitz and passes her off as a real character to accuse Sonny of stealing her character "Sicky Vicky". As a result, Sonny's friendships are ruined and she is fired by Condor Studios.

Meanwhile, Sonny's best friend Tawni still believes Sonny and takes her out of L.A incognito so Sonny can fire a cheese ball at her old high school's football game, as Sonny was scheduled to do. Later everyone deduces Sonny was framed and learn that someone has made a bomb into a cheese ball and realize someone is out to kill Sonny. Chad and the So Random Crew set out to rescue and apologize to her and take off in Chad's private jet.

Mid-flight, the jet's captain is revealed to be Marta incognito, who reveals to everyone that she was the one who framed Sonny and planned on killing her, admitting her motive was all because Sonny loved Chad. Marta intended to leave the So Random crew to die in a plane crash but offered to let Chad live if he agreed to date her. Naturally (and sanely) Chad refuses. Marta jumps out of the Jet with all the extra parachutes, leaving them to crash. Luckily Grady had a parachute on him because his mother advised him to never get on a plane without one. They all jump together on the same parachute, although it rips on the way down due to their weight. By luck, they land next to Tawni's car.

At Sonny's old high school, Marta appeared as Vicky Sikowitz at the football game to take Sonny's place. Sonny and the others arrive just in time, and they tell everyone Sonny was framed. "Vicky" lies and says she only wanted attention and lets Sonny take her place so that she'll get killed by the bomb. Because they haven't told her about the bomb, as Sonny lights the fuse, Chad pushes her out of the way, Zora stops the fuse, and Nico takes the bomb out before it blows. Marta tries to make a break for it but is stopped and exposed by Tawni. After being exposed, Marta is arrested.

She never appears again in the show, but likely got life in prison because she did attempt to kill five people. 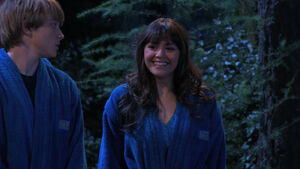 Marta's evil grin.
Add a photo to this gallery

Retrieved from "https://villains.fandom.com/wiki/Penelope_(Sonny_With_A_Chance)?oldid=3705734"
Community content is available under CC-BY-SA unless otherwise noted.