Owner of the Maple Club

Murder Nana Rose, possibly as revenge for abusing her in the past (failed).

Penelope Blossom is a major antagonist in the CW soap opera Riverdale, serving as a supporting antagonist in the first season, one of the main antagonists of the second season, and the main antagonist of the third season. She is revealed to be the true Gargoyle King and an accomplice and partner of the Black Hood. She is the abusive mother of Cheryl and the late Jason Blossom, and she is also the grandmother of Jason and Polly's twin babies, Juniper and Dagwood.

She was portrayed by Nathalie Boltt regularly, and Madelaine Petsch as a high schooler.

Penelope is an abusive, cold-hearted and manipulative woman who abuses Cheryl on a regular basis, often verbally and occasionally physically as well. However, she seems to care about Jason, as she was devastated over his death. On the other hand, it can be speculated that Penelope was somehow corrupted by her evil husband.

She seem to be there when Jason is believe to be drowned, it was a relief for her that Cheryl was not death, when the copse of Jason if found in the river with a bullet in the head she was shock to know he was murdered, but nobody knew who was really behind this. She was of course with her husband Clifford Blossom when the police demand to Cheryl what really happen, because Penelope was always more close to Jason then Cheryl, so, Jason wanted to move away so then Cheryl can have her chance to be close to their parents, much to Penelope and Clifford dismay, while she had a bad start With Alice that she slap in the face after she write an article about Jason's autopsy.

She was never happy when she learn the truth about the plan of Jason, she became again spiteful about Cheryl, she also refuse that her daughter show up to Jason's funeral pretending that she already say goodbye to him, much to her shock Cheryl walk in the funeral, she get very angry at Cheryl for disobey her, threatened her to put her on the internet in Europe.

She buried Jason like she was predicted in the family graveyard, but she was shock to know Polly who was the ex-fiancée of Jason was pregnant, she tell Polly during her baby shower that not all its lost forever, of course when Cheryl confront her to tell her why she is so cold to her, instead to be close to her then Jason, Penelope grabbed her and bring her in the family maple syrup farm revealed that her father wanted Cheryl to have it and not Jason, saying to she Cheryl that she can drown herself in the syrup if she want, when Cheryl finally revealed that Clifford kill their own son, working for the Southside Serpents, she call the police, but when Office Keller and his men's came, Clifford commit suicide for be sure to not be imprisoned, of course when Cheryl wanted to talk to her mother about her problems, Penelope does not care. This makes Cheryl wanted to kill herself, but she is save by Archie and the others, as Betty makes a speech at Riverdale party telling that everyone should get in a fresh start, Penelope found Cheryl who then burn all the house, so, she and her can have fresh start, much to the dismay of the latter.

In the Season 3 finale, it is revealed that Penelope is the Gargoyle King and the mastermind we found out she is the mastermind behind the Gryphons and Gargoyles. She murdered Principal Featherhead as the Gargoyle King in high school. Many years later, after the death of Jason, Penelope began working with Hal Cooper as the Black Hood, cultivating his murderous impulses to take revenge on Riverdale. She then recruit Hal's disciple, Chic, to act as the new Gargoyle King and she had him introduce Gryphons and Gargoyles to everyone. 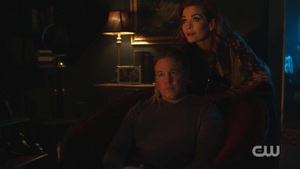 The masterminds of the Black Hood 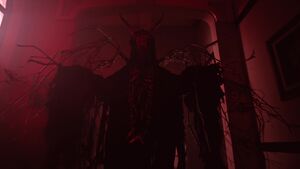 Penelope as the Gargoyle King
Add a photo to this gallery

Retrieved from "https://villains.fandom.com/wiki/Penelope_Blossom?oldid=3159204"
Community content is available under CC-BY-SA unless otherwise noted.