Get the attention of Thomas Wayne (formerly).

Raise Arthur as good as she views it.
Prevent Arthur from uncovering the truth about his parentage.
Restore her relationship with Thomas Wayne (all failed).

Penny Fleck is the deuteragonist of the 2019 psychological thriller film Joker, the first installment of the DC Black film series.

Penny Fleck was born around 1927. When Penny was younger, she worked as a housekeeper for Thomas Wayne and developed an obsessive crush on him; however, she could not pursue the relationship, either because she was already in a relationship with her abusive boyfriend or because Thomas was already in a relationship with Martha and/or was not the least bit interested. This caused her to adopt Arthur Fleck and take him in as her son, but she was sent to Arkham Mental State Hospital because of her mental instability and her inability to save Arthur from abuse in the hands of her boyfriend.

Arthur, as a result of the constant abuse and trauma he had endured, grew up to forget that Penny was apart of this abuse and this resulted in him growing up with her. She began writing letters to Thomas Wayne to get his attention, believing that she once had a relationship with the man. Arthur soon finds out her letters, causing her to explain to him about her supposed relations with Thomas, stating that he is a good man.

After Arthur investigates the truth about her claims after being told off from Alfred Pennyworth and assaulted by Thomas Wayne, he finds out that what she said was not true, and that the letters were feigned. Fed up with lies and furious on Penny, Arthur meets her in the hospital after she suffers from a stroke. Having found legal documents from Arkham who reveals that she is not his real mother, that she is insane and that she even is responsible for his uncontrollable laughter by letting her boyfriend abuse him as a child, Arthur kills her while in the custody of the medical hospital by smothering her with a pillow, making Penny pay for all those years of abuse and lies. However, given her role in Arthur's descent into complete insanity, there's one certain thing about Penny Fleck: she is partially responsible for making her son to become the person he is now.

Penny is not mentally well as a person as she possibly has schizophrenic and narcissistic tendencies hinted in the film. She delusionally believes that Thomas Wayne will respond to her letters and help her and Arthur. She is shown to be neglectful as she didn't save Arthur as a child from his abuse, it's unknown why she didn't but it's presumed she was abused by her boyfriend as well, causing or contributing to her mental problems. Penny to always seems to live in a fantasy world there she once had an relationship with Thomas Wayne and even seems unable to realize the reality and never accepts her mistakes.

While Penny cares about her son, she has shown to lie to him multiple occasions which eventually leads to her downfall once Arthur finds out the truth. Penny is also shown to be somewhat degrading to Arthur at times, claiming that he "needs to be funny" in order to be a comedian.

She seems to spend almost all of her time watching television or sleeping, never leaving the apartment and relying on Arthur for most things. 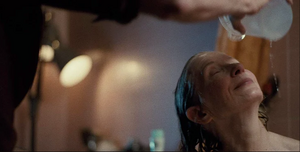 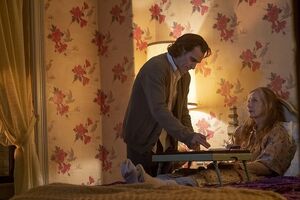 Penny during dinner.
Add a photo to this gallery

Retrieved from "https://villains.fandom.com/wiki/Penny_Fleck?oldid=4338515"
Community content is available under CC-BY-SA unless otherwise noted.