To steal weapons from other survivors.

Scientific Thief
Yuri Zavoyski or The Pentagon Thief is a mysterious enemy who only appears in the zombie level "Five" in the 2010 video game Call of Duty: Black Ops. He is a mad scientist of some sort who is surrounded by a strange red glowing aura with random numbers floating in it, and appears inside the Pentagon once every several rounds, where he will run after the players and attempt to steal their weapons.

If he manages to steal from everyone, he will disappear and the weapons will be lost, but if he is killed you get your weapons back. The Pentagon Thief has an abnormally large amount of health however, and is very fast, so killing him is not necessarily easy. It is implied that he is somehow connected to the Illuminati and has traveled through time.

He was unfortunately killed by Cornelius Pernell in his attempt to find out about Agartha and the Aether. 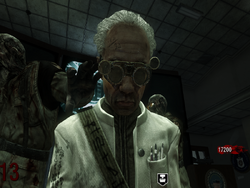 A close-up view on the Pentagon Thief.