Having his tumorous feet massaged.

Engaging in sado-masochistic acts.
Hedonism and self indulgence.
Watching events at the Thunderdome Plus.
Counting his deficit.

Count the costs and deficit of the venture (all failed).

The People Eater is a major antagonist in Mad Max: Fury Road. He is the Mayor of Gas Town, and alongside his allies Immortan Joe and the Bullet Farmer, he serves as the third warlord of the Wasteland.

He was portrayed by John Howard.

Unlike his militaristic counterparts at the Citadel and the Bullet Farm, the People Eater styles himself as an old-world oil baron, dressed as he is in the tattered remains of a pre-war business suit. In keeping with this image of wealth and success, he is grotesquely obese, his bloated frame easily distinguishing him from the rank and file of his entourage; with edible food and water being difficult to find consistently in the Wasteland, the People Eater's massive bulk also serves as a status symbol in contrast to the wasted frames of Joe's citizenry.

However, he is still a resident of the wasteland, and sports many of the ailments and affectations that other post-apocalyptic warmongers demonstrate, likely ruined by disease or injury, his nose is hidden behind a filigreed metal prosthetic; holes have been torn in his waistcoat to reveal pierced nipples hooked to a chain at his belt. For some reason, he appears to be wearing a gas mask over his crotch and his feet are horribly swollen and tumorous, both of which being caused of either by Wasteland diseases or simply by gout, another suggestion of his uncommon access to food and luxury. Because of his immense weight and bloated feet, he moves slowly and unsteadily at the best of times, and has to be physically lifted into the cab of his vehicle.

His vehicle of choice reflects both his wealth and his sphere of influence: a colossal oil tanker and refinery from which other vehicles can refuel while still driving, it's cab is a Mercedes limousine mounted on the chassis and tires of a military truck, ornamented with a massive set of polished chrome fenders, themselves decorated with elaborate carvings and inlaid skulls. Ornate window grills shade the People Eater inside the cab's plush interior, with the steering wheel is equipped with braided horse hair, an incredible rarity given that no horses have been seen in the film. The levers have been replaced with pearl-handled revolver grips, the pedals are studded with coins forming the shape of a dollar sign, and the cushioned back seats are littered with the many ledgers by which the People Eater calculates the profits and losses of the journey. For good measure, he usually travels with a chauffeur and keeps a gunner stationed at the sun roof.

Introduced shortly after Max joins Furiosa and the Wives in the escape from Immortan Joe, he is first seen at the head of the army summoned from Gas Town, having tagged along "to count the cost". As a calculator and administrator, much of his time is spent in the background, grumbling with the Bullet Farmer over going to so much fuss just to rescue a small and likely replaceable group of women.

When Joe's convoy is stuck in the bogs, the People Eater is shown as one of the few members of Immortan Joe's retinue willing to raise his voice to the feared warlord, angrily lambasting him over the wastage of precious guzzoline and vehicles. However, though he may be contemptuous of the lengths Joe may be willing to go to, he still recognizes the potential value of the Wives, and councils the Bullet Farmer to avoid damaging the "assets".

After spending much of the following day relaxing in the shade, the People Eater hastily joins the convey chasing the War Rig back to the Citadel. During this chase, the Vulvalini warrior Valkyrie is dislodged from her bike by one of the War Boys' cars, though she manages to avoid getting run over by Immortan Joe and makes a spirited attempt at assassinating the hated dictator. Foiled by the bullet-proof glass on Joe's windscreen, the People Eater takes the wheel from his chauffeur and swerves violently into Valkyrie's path, crushing her beneath the tanker's bulk.

Eventually, the People Eaters tanker pulls in alongside the War Rig, only to be cut off by Slit's deranged attempt at assaulting the cab, which only results in his car getting slammed against the flank of the tanker, killing him in a massive explosion that manages to set the back end of the People Eater's tanker alight. Unaware of the danger, the People Eater sees Max dangling from the War Rig's cab, and motions his chauffeur to run him over. At the last minute, Nux emerges from the bowls of the Rig and kicks Max to safety. Landing on the front of the People Eater's cab, Max drags the chauffeur out of the cab and dives into the driver's seat, knocking the People Eater unconscious.

Moments later, he regains consciousness as the tanker is pulling in alongside Immortan Joe's Gigahorse, and tries to shoot Max - only to have the Luger yanked out of his hands, breaking several fingers along the way. In a frantic attempt to escape the hijacker, the People Eater attempts to haul himself through the sun roof, only to be dragged back into his seat for use as a human shield. Noticing Max in the tanker's cab, Joe opens fire with his revolver, but with the human shield in place, he only succeeds in hitting the People Eater several times in the chest and once in the eye, killing him instantly.

By this time, the fire in the tanker's rear has expanded into an inferno, so Max steers the vehicle as close to the War Rig as he can, shifts the People Eater's considerable weight onto the accelerator pedal, and makes a flying leap for the Rig's cab. Moments later, the entire tanker explodes, incinerating the People Eater's corpse and sending a massive fireball through the bulk of Joe's convoy.

Described as a calculator and a reckoner, the People Eater manages the resources of Immortan Joe's empire, stingily reviewing every surplus and deficit recorded. He can occasionally be seen studying the financial records of their business in one of his immense ledgers, grumbling angrily at unnecessary expenses.

He is known for his immense greed, hoarding wealth and possessions while thousands of Wastelanders starve outside the fortresses from which he and his comrades rule. Notably, when he criticizes Joe for wasting so much fuel and so many vehicles in pursuit of the Wives, he never mentions just how many human resources have been expended on Joe's mad quest, nor does he appear to care. Even though he seems alarmed at the prospect of the Wives being harmed in the Bullet Farmer's assault on the War Rig, he shows no regard for them as individuals or human beings, insisting that "the assets" be protected: in much the same way that Joe regards the wives as property, the People Eater regards them as resources to be exploited while usable and discarded when their usefulness has been exhausted, just as he views everyone else in the Wasteland. In keeping with his materialism, he shows little respect or patience for the fanaticism of Joe's underlings. In a deleted scene in which Joe orders his forces to spread out across the Wasteland, he can be seen rolling his eyes at the cheering and worship on display.

To date, it is unknown if the People Eater is actually a cannibal, though it may explain the unpleasant swellings around his feet. However, even if he doesn't engage in cannibalism, he clearly exhibits a ravenous disregard for human lives - not to mention a decidedly sadistic streak: when Valkyrie is stranded in the middle of the road after being flung from her bike, he actually goes so far as to push his chauffeur aside and take the wheel just long enough to crush Valkyrie under the wheels of his tanker, laughing cruelly. He is also shown to be a coward, as after making one futile attempt to attack Max with his side-arm, his first thought upon finding the ex-bloodbag invading his cab is to climb out through the sun roof in a futile attempt to escape.

The People Eater in the car highjacked by Max. 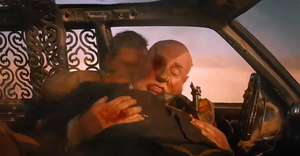 The People Eater being shot by Immortan Joe.