Villains Wiki
Register
Don't have an account?
Sign In
Advertisement
in: Teenagers, Arrowverse Villains, The Atom Villains,
and 19 more
English

Future leader of the Kasnia Conglomerate

Learning what Vandal Savage teaches him

Do whatever Vandal Savage orders him

Per Degaton is a minor antagonist in Legends of Tomorrow.

He is ruler of the Kasnia Conglomerate who rose to power after killing his father.

He is portrayed by Cory Grüter-Andrew.

Per is the son of Tor Degaton, the leader of the Kasnia Conglomerate, a country-corporation that rose to power following the dissolution of traditional governing bodies during the twenty-first century. Although Tor attempted to teach Per to be benevolent and merciful, knowing that his son would one day inherit his shares and thus control of the Conglomerate, Per was corrupted by the teachings of Vandal Savage, his mentor to whom he was much closer than to his father.

Knowing that Degaton would one day be responsible for the unleashing of the Armageddon virus, which would result in the death of billions and would pave the way for Vandal Savage's takeover, the Waverider team decides to kill Per before he can fulfil his grisly destiny.

On his way to his gymnastic class, Per is kidnapped by Rip Hunter, Sara and Snart. They bring him to the Waverider, but Gideon tells them that it made no difference in the timeline. Although the team thinks about dropping him in another timeline, they are told that nothing would made a difference. Realising that the only way would be to kill Degaton, the team is split between those against killing a child and those supporting the idea. During the argument, Rip leaves the room, takes Degaton and uses the dropship to leave the Waverider. Landing near a lake, Rip reveals to Degaton that he needs to die so that Rip's family can live. Per is unimpressed, stating that Rip is not a killer and doesn't have it in him. This is proven correct and Rip does not kill Per.

Meanwhile, Per's father Tor is convinced by Vandal Savage to attack his son's kidnappers and Savage leads Degaton and his men to the Waverider. While the team fights off the assailants, Sara is captured by Savage who demands Rip Hunter in exchange for Sara's life. In this moment, Rip arrives with Per and proposes an exchange of hostages. Although Per tells his father not to agree, as Rip and his team would just return for them in the future, Tor has Savage release Sara and Per is returned to his father. After the exchange, Savage manipulates Per to kill his father and Per stabs Tor in his sleep. After Degaton's death, Per becomes his father's successor and Savage is chosen as Per's proxy due to the boy's youth.

Returning to the Waverider, Rip is told that their trip did nothing to stop Per's rise to power but only cemented it. Moreso, the virus which would not have been unleashed for five years would now be released in a matter of days.

As stated by Gideon, Degaton will be killed by Vandal Savage in the future after he has outlived his usefulness. 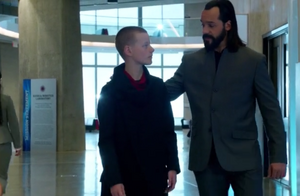 Per with Vandal Savage. 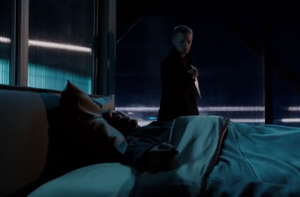 Per killing his father.