Percy is an antagonist from the Regular Show Halloween special, "Terror Tales of the Park". He is a doll, about 40 inch tall. He has old-fashioned, black clothes, with a white collar. He also has white hair, and red cheeks.

Percy was a Victorian doll that Pops had owned since he was a child. He had the ability to talk and spoke with a deep voice, which is strange since his appearance is that of a cherubic, young British boy. He was the most sophisticated doll of his day, with 250 phrases stored inside, yet the only real phrases we heard him say had to do with an obsessive desire to draw on people's faces.

Percy not only spoke of his obsession, but it was discovered that he was also autonomous, "living doll" who actually carried out his intentions and threats of drawing on people's faces. He drew on Pops' face after Pops tried to throw him away, and when Pops tried playing teatime with him after Mordecai and Rigby threw him away, Percy became aggressive and wanted to draw on Pops' face more. Mordecai and Rigby tried to rescue Pops, but Percy escaped and went into the basement.

When Mordecai, Rigby, and Pops went after him, Percy knocked Mordecai and Rigby unconscious with a shovel. Percy demanded Pops to bring him a marker so he could draw on Mordecai and Rigby's faces but then Pops stood up for himself and told Percy that it's not cool for a grown man like him to play with dolls and that Percy must go away. Percy then ran towards Pops to attack him while Pops did the same.

Pops kicked him into the furnace where Percy burned alive. However, after Mordecai and Rigby regained consciousness, Percy emerged from furnace still burning and attempted to attack Pops and his friends, but succumbed to his burns and slumped dead over the floor of the basement. 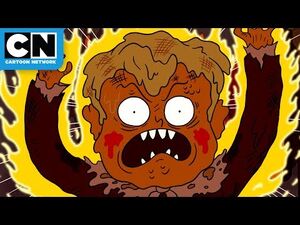