Maintain working at the Green Mile under his cruel and uncouth way (failed).

Belittle his companions to prove that he is better than them (especially Paul and Brutus) (failed).
Dispose Mr. Jingles by killing him (failed).

Percy Wetmore is the secondary antagonist in the 1996 novel The Green Mile by Stephen King, and its 1999 film adaptation of the same name.

He was portrayed by Doug Hutchison, who also portrayed Pete Williard in A Time To Kill.

Percy is a sadistic prison guard who enjoys aggravating the prisoners, particularly Eduard "Del" Delacroix. Although the other guards share a dislike of him, they must be nice to him because he is the governor's nephew. When he is offered a job as a secretary at Brier Ridge Mental Hospital, Paul Edgecomb, the main character, thinks that they are finally rid of Percy. However, Percy refuses to leave unless he is allowed to supervise an execution, so Paul reluctantly allows him to run Del's. Percy sabotages the execution by deliberately not soaking the sponge before putting it on Del's head while Del is in the electric chair. Del suffers an agonizing death by literally frying in the chair (John Coffey channels the pain to himself, however).

When Paul and the other guards plan to take John Coffey, the other main character who heals people by sucking diseases out of them and regurgitating them, to the warden's cancerous wife, they put Percy in a straitjacket, tape his mouth shut and lock him in the block padded cell (both to keep him out of the way, and as punishment for sabotaging Del's execution). After returning, John regurgitates the disease he takes from the warden's wife into Percy. This causes him to go mad and shoot William Wharton to death before going into a permanent catatonic state. He is then committed to Brier Ridge Mental Hospital. In the book, it is mentioned that he later died. In the movie, however, his later fate is never revealed. 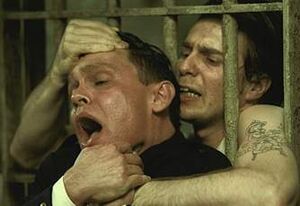 William "Wild Bill" Wharton holding Percy up against his cell.

Percy turns his back in horror as Del burns
Add a photo to this gallery
Retrieved from "https://villains.fandom.com/wiki/Percy_Wetmore?oldid=3452135"
Community content is available under CC-BY-SA unless otherwise noted.