Perfect Peter (by everyone)

Crying and making the most out of very minor offenses.
Playing the cello.
Reading books.
Cleaning.
Being a perfect child.

Punish his brother by any means necessary (mostly succeeded).

Perfect Peter is one of the main antagonists and the deuteragonist in the Horrid Henry franchise.

He was voiced by Emma Tate in the animated TV series adaptation, and portrayed by Ross Marron in the 2011 live action film adaptation.

Perfect Peter is Horrid Henry's little brother. Peter appears to be a perfect and angelic child to the eyes of his parents in contrast to his bratty and rude brother. However, he is a wolf in a sheep's clothing, because Peter is very selfish and spoiled by his parents with an ego almost as big as Henry's. While keeping this facade, Peter's goals include attempting to bring his brother into trouble even for minor things such as being called a "worm" or told to get "out of my way".

In many people's eyes like his parents, Peter's image is that of a content, adorable, sweet-natured child that he believes himself to be. His favorite things include vegetables, fruit, physical exercise, cleanliness, school, classical music, and books - these factors make people always think the best of him. However, he is in fact another character entirely; he is really a condescending and cowardly brat who has a selfish streak for praise and is arrogantly egotistical about it. He is used to getting his own way, and to getting away with everything that he and his brother both do. He also takes an almost sadistic joy in exposing his brother's activities to his parents because it means he gets praised.

He also has a weakness that is frequently spurring his doings throughout the franchise: he adores being the center of attention and becomes intensely furious when this is denied from him, no matter how much he doesn't deserve it. This makes him commit acts that make him just as bad as his brother Henry. He also has an incessant habit of flaunting the smallest things he has done to his parents with the hope of receiving praise - the smallest things, from getting up in the morning to laying the table to polishing his shoes and even "being a normal child". 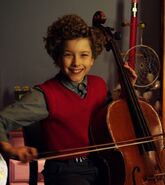 Perfect Peter doing an Evil Grin.
Add a photo to this gallery
Retrieved from "https://villains.fandom.com/wiki/Perfect_Peter?oldid=4295451"
Community content is available under CC-BY-SA unless otherwise noted.