Evil Object
The Perfect Sandwich is a one-time villain from the Teen Titans Go! episode, "Sandwich Thief". She is a sandwich that was constructed by Robin to be absolutely perfect but she was stolen by Robin's future self. Somewhere along the way, the perfect sandwich somehow gained sentience and turned into an evil villain, who thought that sandwiches were superior to every other species in the universe.

In "Sandwich Thief", Robin made himself a sandwich that was objectively perfect. He left in in the refrigerator to crisp, which would have been the finishing touch on the meal. However, when Robin went back to get it, the perfect sandwich was mysteriously missing. Robin went completely insane over this and got all bent out of shape, looking for the thief who stole his sandwich. None of the other Titans did it but Robin still obsessed over who the thief was. The Titans eventually got annoyed with his fixation on the sandwich and kept telling him to "let it go", but Robin consistently refused, saying that it was too important to forget about.

Robin eventually came to the conclusion that the only person capable of stealing his sandwich was himself in the future. He deduced that in the alternate timeline, he became so obsessed with the taste of his sandwich that he traveled back in time and swiped it from the past to eat it again and that he was trapped in the timeline, where the sandwich was stolen from. He got into the time machine to go to the future.

Robin went to another planet in search of the sandwich, which drove all the other Titans crazy. The other Titans yelled at him once more, demanding that he just let it go. Just then, The Perfect Sandwich rose from the ground, on a throne of glory and introduced herself to them. She gave the Titans a brief rundown of her backstory, which aligned with Robin's conspiracy perfectly, much to everyone else's shock. The Perfect Sandwich stated that during her many years on the distant planet alone, she had the time to ponder her existence and she realized that as something perfect, she is the most superior species in the universe and that every other species must be destroyed and that she was going to start by destroying the Teen Titans.

The Perfect Sandwich fought with the Teen Titans but she was much too perfect for anyone else to stop her. However, Robin remembered what her true destiny was in the world and that was to be eaten. So Robin lept up into the air and ate her, but not before getting the other Titans to admit they were wrong. Robin happily devoured his perfect sandwich and commented on how perfect it was. 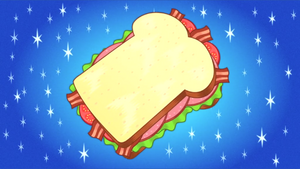 The Perfect Sandwich before it came to life. 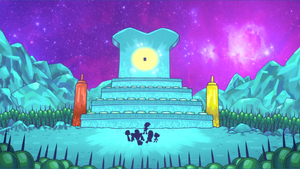 The Perfect Sandwich sitting upon its throne. 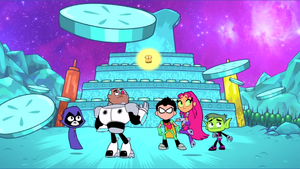 The Perfect Sandwich using its telekinetic powers to attack the Teen Titans. 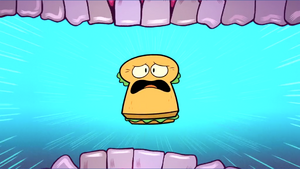 The Perfect Sandwich trembling in its admitted defeat, just before getting eaten by Robin.